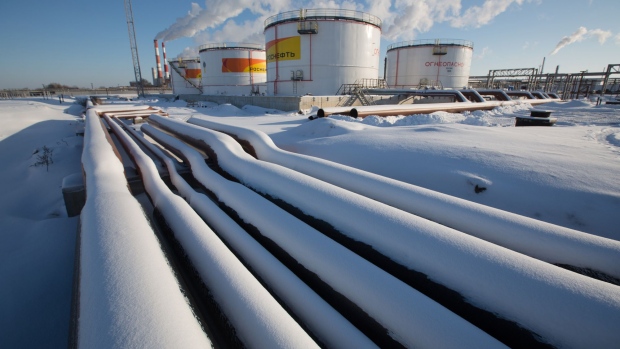 (Bloomberg) -- Estonia’s foreign minister called for the price of any cap on Russian oil to be set as low as possible, while his Lithuanian counterpart brushed off any urgency to agree to any price, with the two Baltic nations ranking as holdouts in contentious talks at the European Union.

EU states have debated whether to set a price cap as low as $62 a barrel on exports of Russian crude oil after several countries demanded a level that could put more pressure on Moscow, but the talks remain stuck, diplomats said. Poland and the Baltic nations said the price level was still too high, according to the diplomats.

Asked about the $62 level and how low the price needs to go, Estonian Foreign Minister Urmas Reinsalu told reporters on Tuesday that it needs to be “as low as possible,” adding the solution needs to cause “pain” for Russia.

“We are aware that the main net income to the Russian state budget comes from energy resources and we have to take a stronger stance,” Reinsalu said ahead of a meeting of NATO foreign ministers in Bucharest. “This has been, in the course of these negotiations around the EU table, our message.”

Lithuanian Foreign Minister Gabrielius Landsbergis said “there is no pressure on us to agree to set the price as it is now,” adding the proposed price cap is a theoretical one with market prices falling. “We’re talking about a ceiling that prices are currently not even reaching,” he said.

The Group of Seven nations have been trying to get the price cap plan into place before new EU sanctions on Russian oil take effect on Dec. 5. Officials pushing the cap plan have warned that global oil prices could spike if those sanctions take effect without such a mechanism. The oil cap has the dual aim of trying to keep Russian oil flowing while also limiting Moscow’s revenues.

Landsbergis stressed that Russia’s costs to extract oil amount to about $20 a barrel and the government would “have to explain to our citizens that we are willing to leave $42 to Russia per every barrel.”

The EU originally proposed capping the price of Russian oil at $65 a barrel. But with Russia already selling its crude at a discount, the cap levels being debated are all higher than current market rates.

Russia’s flagship Urals oil is currently trading at about $52 a barrel from two key western ports, according to data provided to Bloomberg by the market’s two main price reporting agencies: Argus Media Ltd. and Platts, part of S&P Global Inc.

Prices of Russian crude from the country’s eastern export terminals are markedly higher than that. But Urals and other crudes shipped from the west of Russia account for about 70% to 75% of the nation’s seaborne flows observed in tanker tracking by Bloomberg. Urals itself is by far the nation’s biggest stream.

Landsbergis said Lithuania was not the only country that had doubts about the price level being debated, while Reinsalu stressed Estonia is a “strong and determined supporter” of an oil cap.

“At the end, the outcome will be favorable but not to Russia,” Landsbergis said.

--With assistance from Alberto Nardelli, Ewa Krukowska and Jorge Valero.