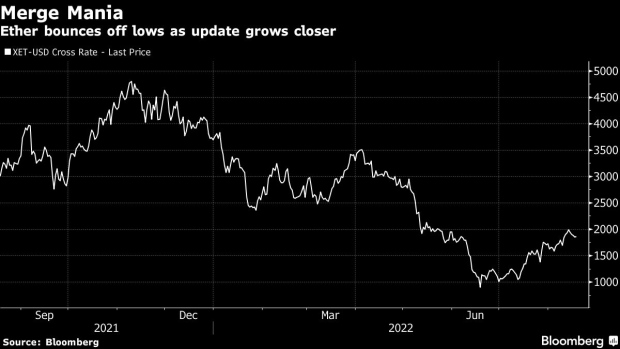 (Bloomberg) -- The core developers working on the much-anticipated software upgrade of the Ethereum blockchain firmed up Sept. 15 as the likely official date of the so-called Merge.

This is likely the final forecast for the timing of the upgrade, which will make the network more energy efficient, according to a developer’s conference call Thursday. A tentative date range for mid-September was set at a developers’ meeting last week.

Still, the actual date of the Merge could change since it will likely be impacted by any large swings in the amount of support Ethereum has to order transactions. In an emergency, if support drops off, developers can move the Merge forward ahead of schedule.

Called the Merge, the software upgrade has been in the works for years, and it will change the way Ethereum orders transactions. Instead of using energy-guzzling computers called miners, the network will deploy so-called validators using staked Ether tokens -- a setup called proof of stake.

Ether, the native cryptocurrency of the blockchain, was little changed at around $1,850 as of 11:54 a.m. in New York. It has surged about 70% since digital-asset prices tumbled in the middle of June. It traded at a record of almost $4,900 in November.

Ethereum developers also debated on the call whether the network will be as censorship-resistant as the current rendition. Several developers raised concern about potential for validators and builders, new parties that will compile transactions into blocks on the upgraded blockchain, to omit certain transactions from inclusion into blocks recorded on the chain under government pressure. The issue is coming to a head in the face of recent US government sanctions against Tornado Cash, a coin mixing service.

In a tweet on Aug. 17, Brian Armstrong, chief executive officer of Coinbase Global Inc., said the biggest US crypto exchange will likely exit its validator business if forced by the government to censor certain Ethereum transactions.

“This is the hill I am willing to die on, if we start allowing users to be censored on Ethereum, then this whole thing does not make sense, and I will be leaving and starting something else,” developer Marius van der Wijden said on the call. “Censorship resistance is the highest goal in Ethereum.”

(Updates with comment on censorship concerns in the final three paragraphs.)