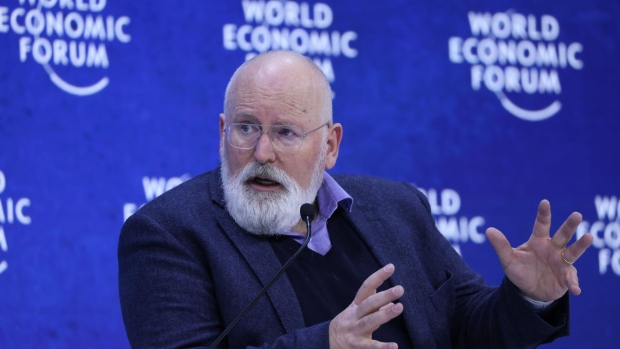 (Bloomberg) -- The European Union’s climate chief urged energy companies to do more to ease a cost-of-living crisis that’s hurting some of the poorest consumers and undermining support for the green transition.

Utilities must carry more of the burden when it comes to the energy crisis that has been exacerbated by Russia’s invasion of Ukraine, Frans Timmermans said on a Bloomberg panel at the World Economic Forum in Davos, Switzerland. He singled out the need to address big windfall profits made by energy companies in particular as a way of maintaining support for a greener future.

“The fact that energy companies are now pocketing windfall profits -- incredibly high profits -- while citizens are suffering because they don’t know how to pay their energy bills” isn’t helping to create a long-term cooperation between companies and politics, he said on a panel alongside Spanish Prime Minister Pedro Sanchez and Lithuanian President Gitanas Nauseda.

The EU is trying to balance efforts to slash its dependency on Russian fossil fuels and keep its climate goals on track following the war in Ukraine. That challenge has been heightened by consumers facing rising inflation -- especially when fueling cars, heating homes and buying food -- putting more pressure on governments to act.

On the same panel, Spain’s Sanchez asked Timmermans whether it was time to reform the EU’s electricity market design, which sets prices according to the cost of the most expensive unit of energy needed to meet demand, which has most recently been gas. Spain and Portugal have approved rules to cap natural gas prices.

Timmermans responded by saying that reform needs to be taken step-by-step, but it is something that will be discussed at a meeting of EU leaders next week.

“It doesn’t make any sense to pay or to have this spike in the gas price and that is at the end of the day poisoning the electricity market and of course the electricity bills,” Sanchez said. “If we want to have social support for this green transition we need to be much more ambitious at the European level.”