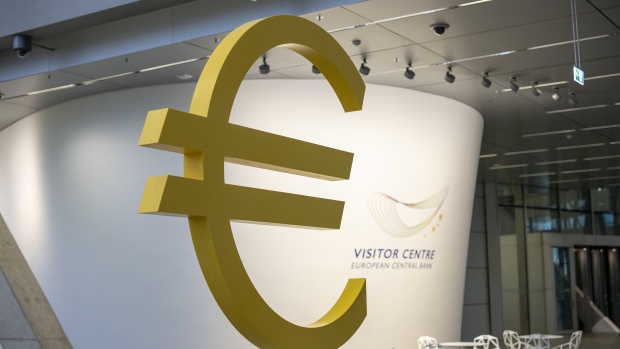 A euro currency symbol sits on display in the visitor centre at the European Central Bank (ECB) building in Frankfurt, Germany, on Monday, Nov. 4, 2019. The ECB started a new era on Friday when Christine Lagarde became the institution's first female president -- and for now its sole female policy maker. , Bloomberg

European Union leaders were given a new compromise proposal for a 750 billion-euro (US$858 billion) recovery fund to help the bloc overcome the economic fallout from the coronavirus pandemic.

European Council President Charles Michel distributed the latest plan on Monday, which would include 390 billion euros of grants, down from an initial 500 billion euros, and 360 billion euros of low-interest loans, according to a copy of the proposal seen by Bloomberg.

The latest attempt to find a plan that would win the backing of the EU’s 27 governments comes as leaders prepared to resume talks in Brussels Monday evening, which have been going on since Friday, with the aim of clinching a deal on the radical support package. The new proposal seeks to break an impasse between fiscal conservatives in northern Europe and a majority who want decisive action to help the predominantly southern nations hardest hit by the recession.

With investors already pricing in an agreement after a series of bold announcements in recent weeks, leaders are under intense pressure to bridge their differences, especially as their talks dragged on past the weekend. At times the discussions grew heated, with several officials saying the whole negotiation was on the brink of collapse as familiar fault lines emerged between the member states.

“After lengthy talks last night, we worked out a framework for a possible agreement,” German Chancellor Angela Merkel said on Monday before the new plan was released. “It’s progress and gives hope that perhaps today an agreement will be made, or at least that an agreement is possible.”

At stake is not just the amount of funds that will be given to countries, but the ability of the EU as a whole to offer meaningful solidarity to its members. If they can reach a deal on the plan, which would be financed by joint debt issuance, it would mark an unprecedented deepening of financial integration for the bloc.

Most leaders are seeking a decisive response from the bloc with more than 100,000 Europeans dead from COVID-19 and their economies battered by the lockdown. But a handful of fiscal hawks led by Dutch Prime Minister Mark Rutte have been pushing to reduce the total size of the stimulus package and to impose strict constraints on how it can be used.

Leaders have been warning that an accord is far from a given, though they have been sounding cautiously optimistic over the past few hours. All 27 member states need to agree before the plan can move forward.

While officials from all sides have suggested the newly proposed volume of 390 billion euros in grants would be acceptable, it’s unclear whether other aspects of the the latest compromise would be met with consensus, including on issues such as the climate.

The new proposal would also have a provision to ensure that member states respect the rule of law and would make funding conditional on upholding democratic standards. The European Commission would propose “proportionate measures,” which would be approved by qualified majority by the capitals.

This may cause problems with Poland and Hungary, both of which have been accused by the EU of democratic backsliding. Hungarian Prime Minister Viktor Orban has even threatened to veto the entire recovery fund if the EU doesn’t withdraw an earlier probe into rule-of-law violations.

Meanwhile, the document also seeks to strike a balance between Dutch demands that the plan have an iron-clad guarantee that the money will go, as intended, to projects that will upgrade their economies, and concerns by opponents of the idea that such a mechanism could delay vital tranches of funds.

The proposal specifies that a positive assessment of payment requests by the commission “will be subject to the satisfactory fulfillment of the relevant milestones and targets.” If, exceptionally, one or more countries identify “serious deviations,” they can request the matter be discussed by leaders in their next meeting, a process that should not take more than three months.

In what’s likely to be the strongest bargaining chip to win over the group of rich nations is the amount they’ll get in cash rebates from the EU’s regular budget, thus reducing their annual net contributions. The draft would see Denmark, Germany, the Netherlands, Austria and Sweden getting 52.8 billion euros in rebates over seven years.