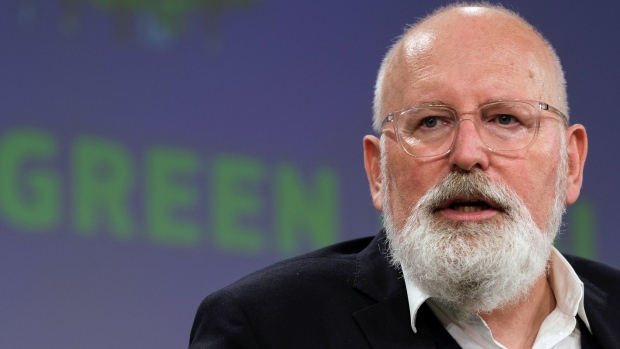 Frans Timmermans, vice president of the European Commission, speaks as the European Union (EU) unveils a landmark climate plan in Brussels, Belgium, on Wednesday, July 14, 2021. The EU is set to transform every corner of its economy -- from how people heat their home to the cars they drive -- as the bloc uses a massive overhaul of rules to position itself as a global leader on climate change. , Bloomberg

(Bloomberg) -- European Union climate chief Frans Timmermans gave the clearest signal yet that the bloc is considering a role for natural gas under its green rulebook for investments, setting up a clash with some national governments.

Timmermans said that an exit from coal for some member states, like Poland, would require an “intermediary stage” using natural gas. It would be subject to strict conditions, including pre-fitting pipelines so that they can carry hydrogen and de-carbonized gases after the transition from natural gas ends.

“We will have to also invest in natural gas infrastructure,” Timmermans said in a press conference at the COP26 climate conference in Glasgow, Scotland. “As long as we do it with an eye of only doing this for a period, then I think this is a justified investment.”

Environmental groups have criticized the potential inclusion of natural gas in the EU’s so-called taxonomy, the set of rules determining whether certain investments can be classified as green. They say that it would result in the bloc avoiding its responsibility to keep global warming below 1.5-degrees Celsius, and that it may open the door to also include nuclear energy.

The EU has touted its green regulation as the “gold standard” globally. While the original plan left out nuclear and gas, some countries such as France are pushing for the inclusion of those sources amid a spike in energy prices.

This sets the scene for a potentially fierce fight between member states. In a joint statement issued during COP26, environment ministers from Germany, Denmark, Portugal, Austria and Luxembourg warned against classifying nuclear power as green in the EU’s sustainable investment rulebook.

“It’s a bad decision to put nuclear inside European taxonomy,” Portugal Environment Minister Joao Pedro Matos Fernandes said. “It’s not safe, it’s not sustainable and it costs a lot of money. There are many other options, especially wind and solar.”