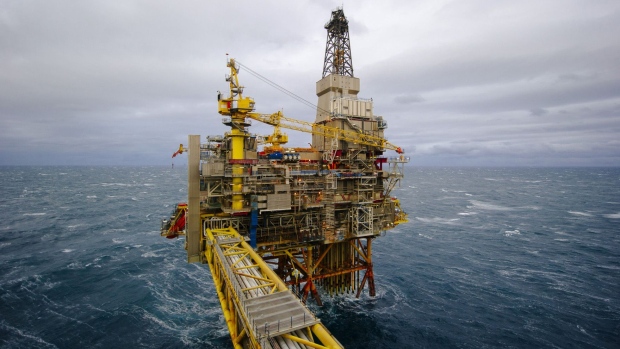 The Oseberg A offshore gas platform in the North Sea near Bergen, Norway. , Photographer: Kristian Helgesen/Bloomberg

(Bloomberg) -- The European Union reached an agreement with Norway to source more natural gas from the Nordic nation as the bloc tries to lower surging prices and boost security of supplies after Russia, its biggest provider, cut flows to almost half of member states.

The 27-nation EU is racing to phase out Russian gas and find new sources across the world after President Vladimir Putin’s invasion of Ukraine. Moscow has started cutting shipments to Europe, affecting 12 member states and pushing Germany to raise its gas-risk level to the second-highest “alarm” phase.

“Given the high production levels seen in Norway in the first months of the year -- a trend that is anticipated to continue for the rest of the year -- there is strong potential for increased sales to Europe in 2022,” the EU and Norway said in a joint statement on Thursday.

Energy security is at the top of the EU’s political agenda, with the region’s leaders expected to discuss the issue at a summit in Brussels on Friday. The supply woes have pushed gas and power prices to record levels, fueling inflation.

Norway, the bloc’s second-biggest supplier, is pumping at full tilt, benefiting from record prices and demand for its fuel. The EU aims to curb imports from Moscow by almost two-thirds this year and phase out Russian fossil fuels by 2027.

In the statement, the EU and Norway said that their agreement would bring close to 100 terrawatt hours of extra energy to the European market.