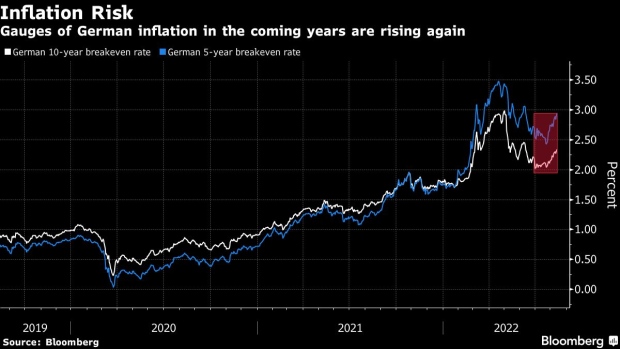 The European Central Bank (ECB) headquarters beyond traffic passing residential buildings in Frankfurt, Germany, on Monday, May 23, 2022. While ECB policy makers have increasingly coalesced around the prospect of a first hike at their July 21 meeting in recent weeks, they have barely mentioned the possibility of a more aggressive half-point move such as the US Federal Reserve delivered this month. Photographer: Alex Kraus/Bloomberg , Bloomberg

(Bloomberg) -- Fund managers are warning the market is turning complacent over the outlook for inflation in Europe, where the prospect of recession has stoked the appeal of sheltering in bonds.

Government debt has staged a strong rally from lows set in June as the economic outlook darkens and fears over surging consumer prices take a back seat. But unlike in the US, where the latest print showed inflation slowed, a second reading of euro-area CPI this week will likely confirm inflation accelerated to a record 8.9%. Markets are pricing a peak of about 10% in September, according to Nordea Bank Abp.

With the worst yet to come in Europe, strategists say policy makers may hike more aggressively than many expect, upending a bond rally that some say has gone too far. Nordea sees two-year German bond yields rising to 1.10% by year-end, nearly double the current level. Alliance Bernstein portfolio manager Nick Sanders sees fair value at 0.8%, saying even now, the market is not accurately reflecting the scale of hikes priced in.

“Despite the weakening outlook, the ECB will have to strengthen its credentials as an inflation fighter and continue to raise rates,” said Jan von Gerich, chief strategist at Nordea Bank.

The ECB’s task is particularly tough because monetary policy has little bearing on energy prices -- the key driver of inflation in Europe -- which have rocketed in the wake of Russia’s invasion of Ukraine. Contrast that with the US where the energy crisis is less acute, and services inflation is the biggest contributor, according to data compiled by Danske Bank’s chief strategist Piet Christiansen.

Meanwhile, a drought has seen the Rhine River -- a key trade route -- dry up, which may stoke both inflationary and growth pressures. Swaps show the market has consistently pushed back the timing of when it sees inflation peaking.

“Even though we see a sharp slowdown in growth, we think there’s room for short-end German bonds to move higher,” Alliance Bernstein’s Sanders said. “The primary responsibility of trying to bring inflation down will continue to be front-and-center for central banks.”

The yield on German two-year debt has more than halved since a June peak to about 0.59%. Swaps tied to policy dates shows the market is pricing in a further 109 basis points of hikes from the ECB this year, with the terminal rate at about 1.45%.

Still, Sanders reckons the ECB will be the first central bank to stop tightening. Federal Reserve officials have indicated that a softening in inflation data published last week doesn’t change the US central bank’s path.

“I think Powell will hike through neutral -- and more than what the market is pricing -- so US Treasuries are more vulnerable here, whereas the ECB has an excuse to stop hiking,” said Erik Weisman, chief economist and portfolio manager at MFS Investment Management. He’s more cautious on short-dated Treasuries than equivalent European notes.

There are also reasons for optimism over an improvement in Europe’s inflation outlook. Danske Bank’s Christiansen points out that demand for goods is falling and he expects to see prices declining in some categories next year.

But there’s a risk that price pressures will prove stickier than expected due to the region’s energy crisis, he added. It’s possible too that supply-side challenges will continue to dominate over lower demand.

Earlier in August, money markets showed traders only expected a further 100 basis points of hikes, roughly half of what was predicted in late July. To Societe Generale SA rates strategist Adam Kurpiel, that looked too dovish.

“A euro-area recession is not incompatible with inflation staying high, especially if the recession is caused by massive disruptions in the supply of gas,” he wrote in a recent note. “And in a stagflationary environment, monetary policy should be neutral, not accommodative.”