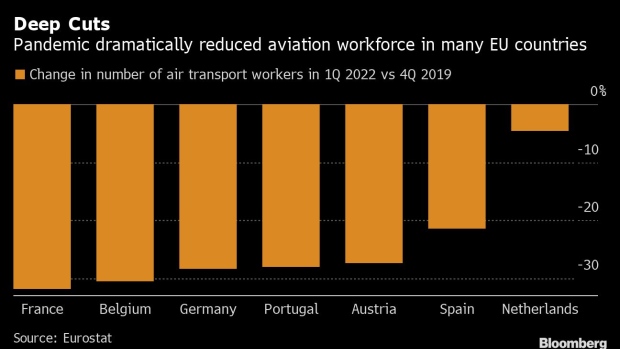 Empty check-in counters for Deutsche Lufthansa AG in the departures hall at Terminal 1 of Frankfurt Airport in Frankfurt, Germany, on Wednesday, July 27, 2022. Lufthansa passengers in Frankfurt and Munich face an almost complete shutdown of operations on Wednesday as a walkout by ground crew forces Europe’s largest airline group to cancel more than 1,000 flights at its two busiest German hubs. , Bloomberg

(Bloomberg) -- An aviation staffing crisis that disrupted flights across Europe this summer is most acute among a younger category of workers who largely left the industry during the coronavirus outbreak, according to official data.

Only about a third of the European Union’s air transport workers were aged under 40 as of the first quarter, figures from the bloc’s Eurostat statistical office show, a much lower proportion than before the pandemic.

The numbers reveal the size of the task facing airlines and airports as they seek to lure new recruits to an industry where posts in areas such as security, cleaning and ground handling can require a long journey to work and unsociable hours at modest rates of pay.

Hiring to so-called air-side roles is also complicated by requirements for specific training and extensive security checks, during which attrition can be extremely high as candidates secure posts with closer start dates elsewhere.

“Fundamental changes in the business model have to occur for aviation to remain a competitive career option,” said David Huttner at PA Consulting Group Ltd. “The industry has always been susceptible to staffing issues within key skill sets, but not at this level.”

About 320,000 people worked in EU air transport in the first three months, according to Eurostat, a quarter fewer than in the equivalent period of 2020, before Covid lockdowns led to mass layoffs, and the lowest tally in 14 years.

Airlines have been forced to scrap thousands of flights as airports shrink schedules in response to the shortfall, with the situation exacerbated by strikes among pilots, cabin crew, baggage handlers and others pressing for higher pay.

Huttner said the situation should ease by next summer as traffic levels become more predictable following this year’s restart from the health crisis.