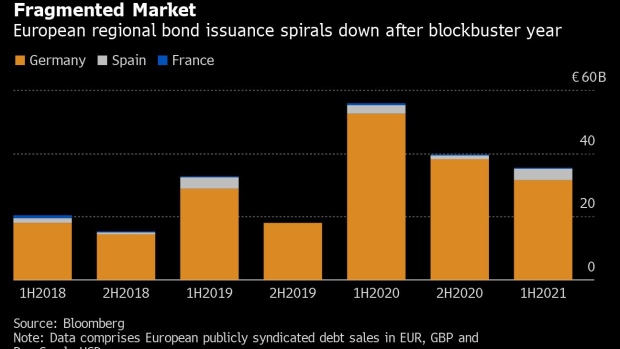 (Bloomberg) -- Europe’s market for state and local debt is on its way back to pre-pandemic size.

As businesses reopen and tax revenues fill government coffers, finance officials are winding down their emergency programs and reining in expansive borrowing. Bond sales have already dropped dramatically from last year’s peak, and experts at JPMorgan Chase & Co. and UniCredit Bank predict the market will soon return to levels similar to 2019.

The shrinking market is bound to frustrate government debt investors, who view state-level European debt as a good way to squeeze a little extra yield out of ultra-safe issuers. For example, a 650 million-euro ($768 million) 10-year note for the State of Schleswig-Holstein this month offered about 31 basis points over German bunds.

“Issuance volumes will inevitably decline,” said Matthias Dax, a credit analyst for sub-sovereigns, agencies and ESG at UniCredit in Munich. “It was only an extraordinary effect of the coronavirus crisis.”

Rising tax revenues and other funding programs, like the landmark NextGenerationEU package, mean that local governments don’t need to raise as much money in public debt markets.

German states, which account for 85% of the Europe’s regional borrowing, are likely to sell 20 billion euros in additional debt this year, according to Ioannis Rallis, JPMorgan’s head of sovereigns, supranationals, and agency debt capital markets. That’s about half of the level from the first half of 2021.