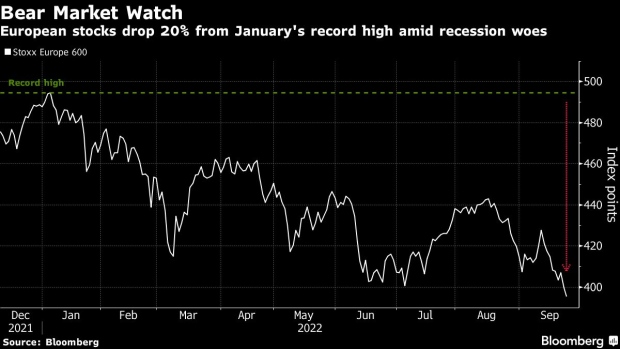 (Bloomberg) -- Europe’s Stoxx 600 Index joined US and regional peers in a bear market as fears of a looming recession hammered demand for risk assets.

The index sank 2.3% by the close in London, to the lowest level since December 2020. Total declines from a January record high are now 21%, confirming a technical bear market.

The European equity benchmark is the last major regional index to cross the bear market threshold after the German DAX and the Euro Stoxx 50 closed in that territory in March, and the S&P 500 followed in June amid concerns about staunchly hawkish central banks, with this week’s outlook by the Federal Reserve adding to fears. European stocks have come under particular pressure this year as they’re more impacted by the war in Ukraine and the escalating energy crisis compared to US peers.

“The market is currently trying to figure out how deep and how long the recession in Europe is going to be,” said Joachim Klement, head of strategy, accounting and sustainability at Liberum Capital. “This will take some more time and in general we expect a bottom in this bear market not before the first quarter of 2023.”

Latest data showed private-sector activity in the euro zone contracted for a third month as record inflation erodes demand and forces some firms to limit production. Investors are also paying the most to insure European high-grade corporate bonds against default since the height of the Covid pandemic as monetary tightening and recession fears worsen business conditions.

In the UK, Liz Truss’s government set out the most radical package of tax cuts since 1972, reducing levies both on worker pay and companies in an effort to boost the longterm potential of the economy. The yield on the 5-year gilt was set for its biggest gain on record, while the pound slumped to the lowest since 1985. The domestically-focused FTSE 250 and exporter-heavy FTSE 100 each fell 2%.

Strategists at banks including Goldman Sachs Group Inc. and Bank of America Corp. have also given up on a year-end rally for European stocks, with forecasts for the Stoxx 600 falling by about 5% in the past month, according to the average of 16 estimates in a Bloomberg survey.

Read More: Goldman to BofA Throw in the Towel on a Year-End Rally in Europe

“We are facing one of the most aggressive and globally pervasive monetary tightenings of a generation,” said James Athey, investment director at Abrdn. “For the equity market to move lower by 20% or so and consider that that’s pricing in the macro conditions, I find incredible. The reality is that earnings forecasts are still not reflecting the likelihood of a material growth slowdown ahead.”

Other strategists have warned about a hit to corporate earnings as a spiraling energy crisis further feeds into inflation. Sanford C. Bernstein strategist Sarah McCarthy said this month she expects 12-month forward earnings estimates to be slashed another 10% to 12%.

“The central bank merry-go-round continues to increase the likelihood of recession on a global scale and until such time as the effects of tightening become clearly visible, further volatility alongside skittish investor sentiment is inevitable,” said Richard Hunter, head of markets at Interactive Investor.

Among individual movers, Credit Suisse Group AG slumped to a record low after the bank was forced to deny a Reuters report that it is considering exiting the US market, signaling that doubts still remain over the troubled lender’s upcoming strategy revamp.