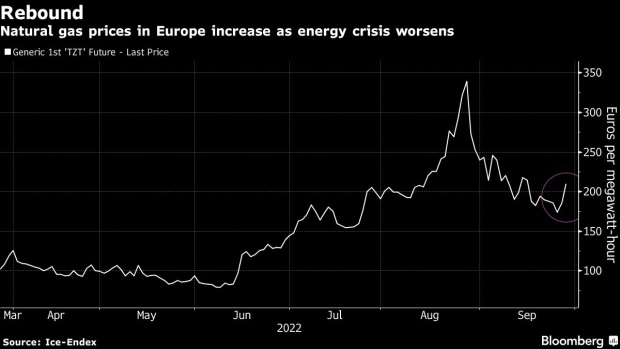 (Bloomberg) -- Natural gas prices in Europe surged after Russia said there’s a risk to supplies via Ukraine, the last route still delivering the fuel to the continent’s major consumers.

Benchmark futures rose 11%, jumping for a second day. The warning ratchets up the energy conflict between Moscow and the West, coming just after major leaks were reported on the Nord Stream links that European authorities called an act of sabotage. The situation heightens concerns over shortages with the heating season just days ahead, and the pipeline blasts are forcing nations to tighten security at key infrastructure.

Russia’s Gazprom PJSC warned Tuesday that flows through Ukraine were at risk because of a legal spat with NJSC Naftogaz Ukrainy over transit payments. If these are halted, western Europe would be cut off, leaving just the TurkStream pipeline sending gas to Turkey, and some south and southeastern European countries. For now, supplies via Ukraine remain stable, albeit at the reduced levels seen since the war. Naftogaz CEO Yuriy Vitrenko said an arbitration against Gazprom will proceed.

The gas market has been roiled this week following a relative calm earlier in September, with rising stockpiles and ample supplies of liquefied natural gas somewhat easing concerns about the upcoming winter. But risks have returned after the powerful underwater explosions in the Nord Stream pipelines left massive streaks of gas bubbling in the Baltic Sea. It dashes any hope that the link, which has been shut over the past month, will return anytime soon.

Attention will now turn to how the European Union responds. Josep Borrell, the EU’s foreign policy chief, said the damage to the pipelines was deliberate, and that the bloc will take more steps to secure its energy facilities.

“This incident looks like an attempted kill shot to prevent Russian gas from ever returning to the European gas market,” said Katja Yafimava, senior research fellow at The Oxford Institute for Energy Studies. “It is a bridge-burning exercise, but who did it is an open question.”

A “real nightmare scenario” would be if sabotage attempts extended to other pipelines, analysts at Deutsche Bank AG said in a note. Norwegian companies are increasing security around their own infrastructure.

Tensions also rose as Russia moved to annex a large chunk of Ukrainian territory after it declared victories in hastily organized referendums it held in the territories currently occupied by its forces and prepared to absorb them within days.

It’s possible that soon after the results of the “sham referenda” come through, Ukraine could be sanctioned by Russia as an unfriendly state, meaning a halt to gas transit through that route, Jonathan Stern, distinguished research fellow at The Oxford Institute for Energy Studies, said at an industry conference in London Wednesday.

“My guess is that within not many days or weeks the only Russian gas left in Europe” will be coming via TurkStream, he said. “That will be about it.”

The worsening of the energy crisis increases Europe’s dependence on LNG and leaves it more exposed to any disruptions in US supplies. Hurricane Ian has led to some production in the Gulf of Mexico being shut, raising concerns that this source of supply could also be limited for a few days.

The events in Europe have also driven up gas prices in other parts of the world as competition for fuel intensifies. Concerns are mounting about the market’s tightness next year and beyond as Russian volumes shrink.

“The unpleasant surprise is how quickly Russian gas is turned off, we thought it would take years not months or weeks,” Andrew Walker, a vice president at Cheniere Energy Inc., which now supplies about 10% of global LNG, said at the London conference. “This winter looks a lot better than the next winter.” Not as much LNG capacity is coming online over the next two years and therefore demand will have to adjust, he said.