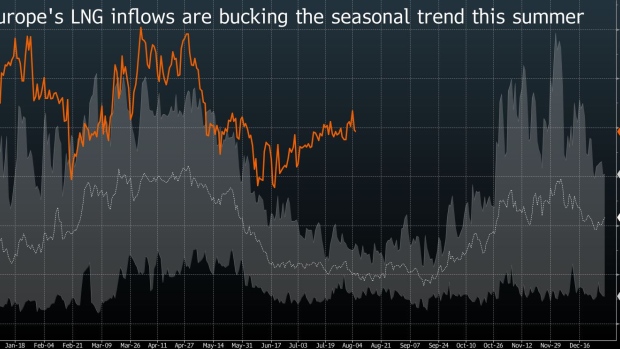 Pipework at a natural gas condensate storage and distribution site in Norg, Netherlands, on Wednesday, Nov. 17, 2021. European gas surged to the highest level in a month, fueling wider inflation concerns, as delays to a controversial new pipeline from Russia stoked fears of a supply shortage this winter. , Bloomberg

Benchmark futures settled 0.5% lower, after hitting a two-week low earlier. The continent’s storage sites are 72% full, near the 5-year average for this time of year, data from Gas Infrastructure Europe show. Yet, risks remain.

Under the UK’s latest “reasonable worst-case scenario,” the country could face an electricity capacity shortfall this winter when cold weather may combine with gas shortages, according to people familiar with the government’s planning.

Germany, the European Union’s biggest economy, needs to cut gas consumption by 20% to cope this heating season and next, Klaus Mueller, president of the federal network agency BNetzA, said Tuesday. To help stabilize or even bring down prices, all EU nations should save the vital fuel, he said on ZDF TV.

The region is rushing to replenish stockpiles before winter to manage the risk of further disruptions from Russia, importing much more liquefied gas than usual to achieve this aim. Moscow curbed flows amid heightened regional tensions following its invasion of Ukraine, sparking an energy crisis that has spilled into EU’s broader economy.

Gas shipments from Russia via Nord Stream, the main pipeline to the continent, have been broadly stable at around 20% of the link’s capacity since late-July, when Moscow cut shipments from 40%. Russia’s Gazprom PJSC has cited issues with turbine maintenance, including sanctions-related delays for the return of equipment, for the reduced flows.

“The market feels confident that storage facilities will be well full across the continent by late autumn, as is the target from the EU,” analysts at trading firm Energi Danmark said in a note. “However, as flows from Russia remain diminished, there are nonetheless so many fears concerning supply during winter, that the market remains elevated.”

Orders for Norwegian gas dipped further on Tuesday. Several facilities considered crucial for supplies to the UK and continental Europe are either undergoing or scheduled to start maintenance this week.

Dutch front-month gas, the European benchmark, closed at 192.18 euros per megawatt hour, after falling to 187.50 euros earlier -- the lowest since July 26. The UK equivalent gained 0.6%.

For now, much of Europe is bracing for another heat wave, which could boost electricity demand for cooling. Temperatures in the UK and France will peak from Thursday to Saturday and move eastward during the next week, forecaster Maxar said in a report.

Benchmark German power for next year settled at a record 406.96 euros per megawatt hour on the European Energy Exchange AG. The French equivalent rose 2.2% to an all-time high amid thin trading volumes.