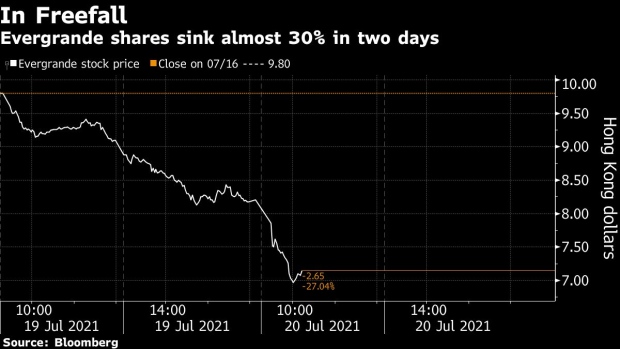 The developer’s shares declined as much as 16% in Hong Kong following a 16% plunge a day earlier. Shares touched HK$6.91 after market open, the lowest level since March 2017. The stock rout has sent Evergrande shares far below its book value.

Hunan province’s Shaoyang city said it took the action after the firm didn’t properly handle pre-sale funds and intentionally evaded supervision, according to a statement posted on the local housing department’s website.

Evergrande didn’t respond to a written request for comment.

The halt came as the company’s stock and bond prices plunged Monday, with a creditor’s successful demand to freeze some assets underscoring concern Evergrande may struggle to raise funds.

Residential sales are a key source of cash flow for the firm, which has been paring its borrowings and met a key debt metric required by regulators as of June 30. Evergrande collected 321 billion yuan ($49 billion) of cash from sales activities in the first half of this year, it said in a July 1 statement.

Chinese developers sell residential properties before construction is completed, but are required to deposit funds from such sales in supervised bank accounts. That is to prevent cash-strapped builders from abandoning projects.

Local authorities repeatedly asked the company to rectify its action, according to the statement, but Evergrande allegedly failed to correct alleged wrongdoings. The sales halt lasts until Oct. 13, the statement said, and Evergrande can’t use funds currently deposited in supervised bank accounts.