Exxon Mobil Corp. entered 2020 with a multiyear growth plan projected to significantly increase its greenhouse-gas emissions. Then came Covid-19 and criticism from activist investors over its record on climate and financial returns.

Now the year will end with Exxon setting new, more ambitious targets to reduce emissions per barrel of oil and disclose, for the first time, data on pollution related to customers’ use of its fuels.

The Irving, Texas-based company said Monday it will reduce upstream emissions intensity -- those caused by pumping oil and gas from the ground -- by as much as 20 per cent by 2025 as well as cutting flaring and methane leaks. Exxon described its new plan as consistent with the goals of the Paris Agreement, which calls for countries to limit global warming to 1.5 degrees Celsius above pre-industrial temperatures.

Like Chevron Corp., Exxon’s climate goals are linked to reducing emissions intensity, meaning less pollution per barrel of oil produced, as opposed to cutting absolute emissions. That leaves the company wiggle room to increase its overall contribution to climate change in the future if crude output grows. 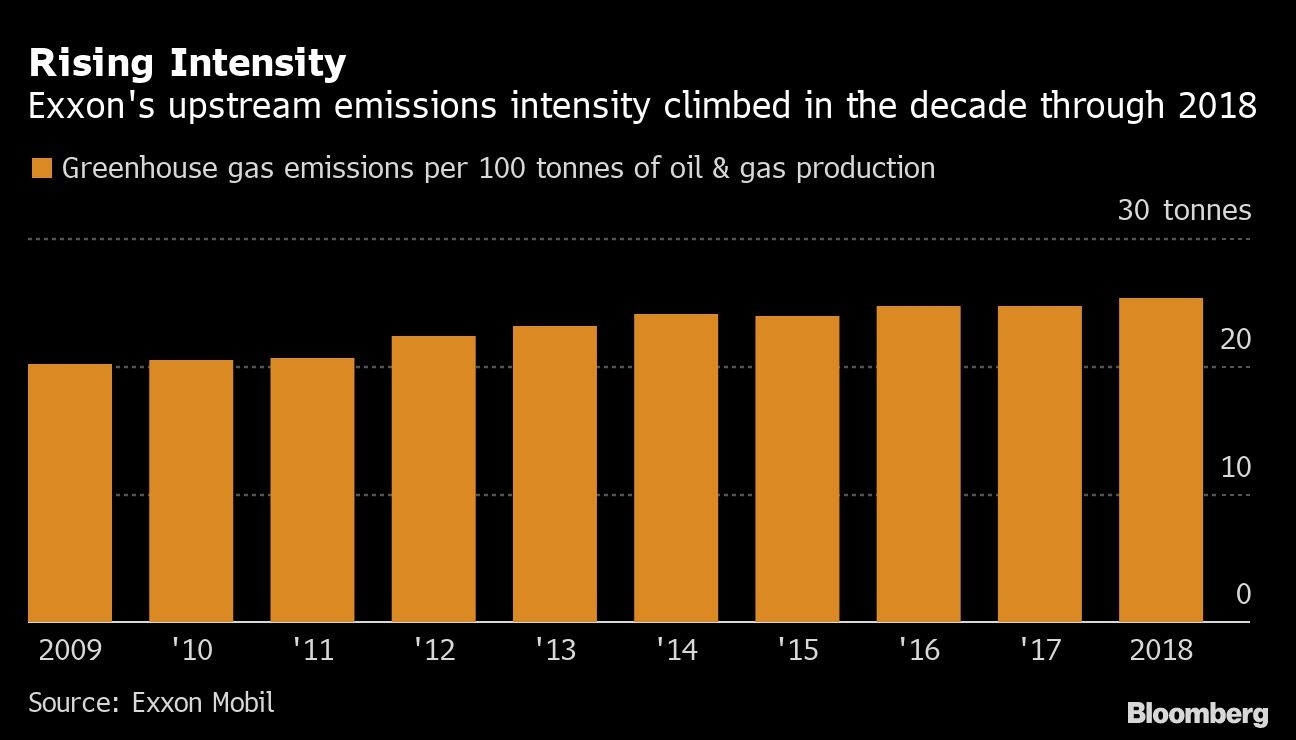 “This was a company that was way behind the industry in terms of how they were thinking about a low-carbon world,” Aeisha Mastagni, a fund manager at California State Teachers’ Retirement System, the second-largest U.S. public pension fund, said in an interview. “The fact that they’re just now getting on board to announce some of those reduction plans tells us a lot about their long-term strategy.”

Exxon’s targets appear weaker than many of those made by European oil companies that have set reduction goals linked not only to internal operations but to customers’ use of products like gasoline. These so-called Scope 3 emissions had not previously been disclosed by Exxon, even as many other oil majors have published such figures.

All major European oil companies have set net-zero goals. BP Plc, Repsol SA and Eni SpA aim to deliver absolute reductions in the short term, whereas Royal Dutch Shell Plc, Total SE and Equinor ASA have set emissions intensity goals. Exxon’s goals are “specific, actionable plans that we can hold our organization accountable” for, said Pete Trelenberg, Exxon’s director of greenhouse gas and climate change, during a call with reporters. The targets will be updated over time, he said.

Activist investors Engine No. 1 and D.E. Shaw & Co. went public last week with criticisms of Exxon for not acting quickly enough on emissions as well as for years of poor shareholder returns. Engine No. 1, which counts CalSTRS among its supporters, called for “more significant investment in net-zero emissions energy sources,” in its letter to Exxon’s board.

CalSTRS would like to see the new climate targets form part of a wider, long-term strategy to better navigate the energy transition, Mastagni said. The fund wants Exxon to appoint four new independent directors who it believes would help create value within a transformation of the energy industry.

Exxon said Monday its emissions pledge was made as part of its annual business planning process and was a “result of of several months of detailed analysis and includes input from shareholders.”

At the beginning of the year, internal Exxon projections showed that emissions would rise 17 per cent over the next five years, according to company documents reviewed by Bloomberg. That increase in greenhouse-gas emissions was tied to a $210 billion expansion of oil and gas production set forth by Chief Executive Officer Darren Woods in 2018.

Exxon said estimates in the planning documents are preliminary and did not include additional measures to cut emissions. The company recently radically scaled back the expansion plan in response to the pandemic-driven reduction in oil demand.

The new targets include:

Exxon chose to target emissions intensity rather than absolute emissions because “we want to try and achieve first-quartile performance” relative to peers, Trelenberg said.

“To achieve the intensity targets we do need absolute emissions reductions as well, and those will be particularly focused in the methane and the flaring areas,” he said.

Exxon’s new plan also includes continued investment in what the company terms “lower-emission technologies such as carbon capture.” This technology to collect carbon dioxide from oil and gas production and safely bury it under ground is often discussed by the company. But earlier this year, as Bloomberg reported this month, Exxon delayed indefinitely a project in Wyoming that would have become one of the largest carbon capture facilities in the world.

Internal documents reviewed by Bloomberg refer to carbon capture, reductions in methane leaks and improvements in energy efficiency as “self-help measures.” At the start of this year, the Exxon documents show that these measures would have amounted to a reduction of 11 million metric tons per year by 2025—less than 10 per cent of Exxon’s most-recently reported direct emissions.