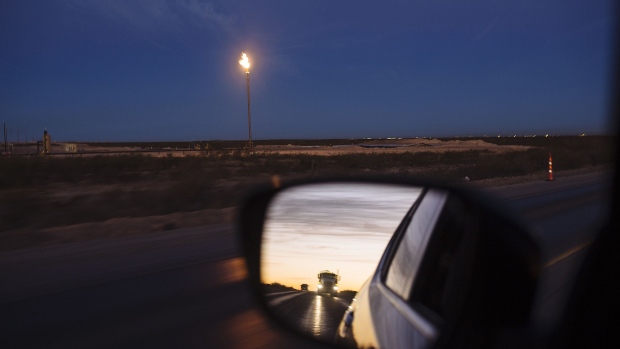 A gas flare burns as a truck is seen in the rearview mirror of a car in the Permian Basin area of Loving County, Texas. , Photographer: Angus Mordant/Bloomberg

(Bloomberg) -- Exxon Mobil Corp. pledged to zero out some greenhouse-gas emissions in North America’s biggest oilfield by the end of the decade.

The largest U.S. crude explorer said it’ll reach net-zero air pollution from its Permian Basin wells, processing plants and other infrastucture -- known as Scopes 1 and 2 emissions -- by the end of 2030, according to an announcement on Monday. The target leaves untouched Scope 3 pollution emanating from consumer use of Exxon-made fuels and other products.

The company plans to achieve the Permian reductions by adopting low-carbon electricity sources, slashing natural gas flaring, and expanding efforts to detect methane leaks, according to the statement. Exxon also plans to use emissions offsets.