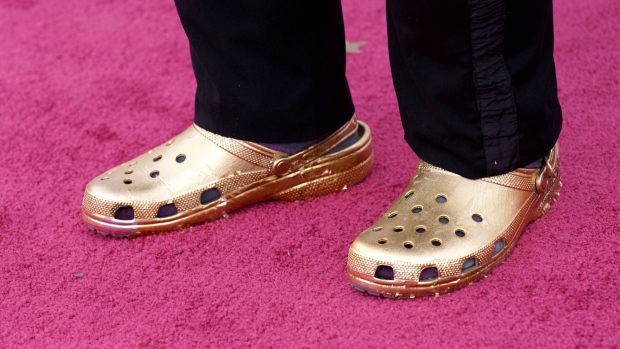 The ungainly but comfy Crocs clogs reached new heights of popularity during the pandemic as not only the ideal work-from-home shoe but as a fashion statement spotted on the feet of Justin Bieber and on the Oscar red carpet worn by Questlove.

With that popularity, however, also came copycats that has the manufacturer suing Walmart Inc., Hobby Lobby Stores Inc. and 19 other companies alleging trademark infringement related to the shoes.

Crocs Inc. said in a complaint filed in Denver that a “rise in consumer online shopping has enabled the sale of infringing footwear on an unprecedented scale.” In a separate action, Crocs has asked the U.S. International Trade Commission to issue an import ban of shoes that copy its trademarked name or designs.

“Crocs is increasing its focus on direct-to-consumer and ramping up its digital presence,” said Katie Abel, executive editor of Fairchild Media Group’s Footwear News. “At the same time, it is decreasing its reliance on wholesale and cutting ties with longtime retail partners. That’s leaving some stores scrambling to figure out how to replace such a hot brand, and it’s likely that some may be looking to competitors and copycats to fill the gap.”

Crocs released its latest quarterly earnings report Thursday morning, beating analysts' highest estimates and boosting its full-year forecasts. Sales in the Americas were US$405.7 million, more than 60 per cent of Crocs' total revenue for the quarter. Shares rose as much as 13.8 per cent Thursday.

Founded in 2002 by three college friends who enjoyed sailing and presented to consumers as a boat shoe, Crocs quickly gained fans among nurses and other workers stuck with long hours standing upright before catching on with fashionistas and the famous. The company, which had an initial public offering in 2006, counts among its well-known wearers former President George W. Bush, and entertainers Jack Nicholson, Whoopi Goldberg, John Cena, Shia LaBeouf, Jennifer Garner, and Sacha Baron Cohen.

The latest surge for Crocs was to aggressively target Millennials and Gen Z with celebrity collaborations. In October, Grammy Award winner Bieber teamed up with the clogs’ maker for a limited edition shoe priced at US$60. A month earlier, the rapper Bad Bunny collaborated with the company for a special edition pair that sold out in 16 minutes. Other collaborators include actress Drew Barrymore and rapper Post Malone.

That extensive brand building is one of the reasons, Crocs explains in the 108-page complaint it filed in Denver, why it deserves all profits from sales of knockoffs and an order compelling the companies to stop marketing their fake Crocs. (Similar lawsuits filed in Newark, New Jersey; Los Angeles; and Chicago were less than half that length.)

Neither Walmart nor Hobby Lobby responded to requests for comment. The remaining companies have yet to respond to the Crocs complaints.

“I think they’re making a statement with some of the big retailers that, ‘You’re coming too close,’” said Leah Evert-Burks, an industry fellow at Michigan State University’s Center for Anti-Counterfeiting and Product Protection, editor-in-chief of The Brand Protection Professional and host of the podcast Brand Protection Stories.

Crocs has licensed its trademarks just once, to luxury designer Balenciaga SA, and the result “was a smashing success” with sales on e-commerce sites including Barneys New York Inc., Crocs said in legal filings. The shoes, which started being sold in 2018, have thick soles and high heels, marking a style departure from the iconic clunky Classic Clog.

In addition to Crocs’ federal court lawsuits, the ITC earlier this month launched an investigation based on a trademark complaint Crocs filed to block U.S. imports of shoes that copy the three-dimensional upper, the textured strip on the heel, the decorative band along the length of the heel strap and the word mark “Crocs.”

“It’s stopping them from coming into the U.S. so they can then be disseminated into the markets of the U.S., including online,” Evert-Burks said. “If you can stop them at the border, you’ve done a good job of protecting your brand.”

This isn’t Crocs first battle to protect its brand.

In 2011, the company won a rare blanket-order ban from the ITC on imports of knockoffs, after the agency found a design patent and a utility patent on making the shoes had been infringed. Double Diamond Distribution Ltd. and U.S.A. Dawgs Inc. later pleaded with a U.S. appeals court to lift the ban after a Patent and Trademark Office examiner canceled the design patent, but the request was denied in April 2018.

The design patent expired in March 2020, but the manufacturing patent doesn’t expire until October 2023.

Representatives of Crocs declined to comment on how the latest legal filings dovetail with the existing ban. A spokesperson referred questions to the company’s prepared statement.

“These actions underscore our determination to take forceful steps to protect our trademarks and other intellectual property,” said Daniel Hart, Crocs’ executive vice president said in the statement. “It is essential that we protect Crocs’ iconic DNA, and we will not tolerate the infringement of our rights or those who try to freeride on the investments we have made in our brand.”

The Americas in 2020 led all segments in revenue growth, as retailers in the second half saw increased sales volume, the company said. The biggest contributor to 2020’s higher revenues, it said, was a higher average selling price, “especially in the Americas.”

E-commerce revenues in the Americas jumped by nearly 81 per cent compared to 2019, and wholesale increased by 42 per cent, Crocs’ report said. Even retail revenue in the Americas grew, by 3.1 per cent despite pandemic-related closures.

Most of the company’s 351 stores were open by the start of 2021. Digital growth “remains a key focus for 2021,” Crocs said in the report, “along with a focus on clogs, sandals, personalization and visible comfort technology.”

Crocs in March seized on its resurgent popularity and cheap financing to borrow in the U.S. junk-bond market for the first time. It followed its record 2020 sales with what one analyst called a “stellar” first quarter, doubling its sales growth guidance for 2021 to 40 per cent-50 per cent from 20 per cent-25 per cent.

Crocs is scheduled to release its latest earnings report Thursday.