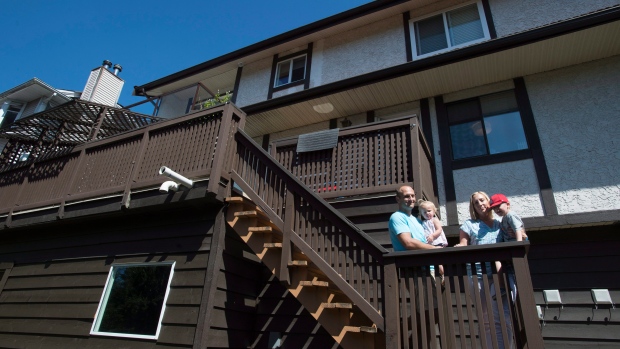 Heather Nyberg along with husband Dan Zimmermann and son Leo and daughter Isabel outside their home in Coquitlam, B.C., Friday, August, 5, 2016. The family say they are affected by the B.C. government's new tax on foreign buyers making the sale of their home fall though. , (THE CANADIAN PRESS/Jonathan Hayward)

COQUITLAM, B.C. -- Cardboard moving boxes are piled about the living room of an otherwise half-packed house nestled on a tree-lined residential street in a quiet Vancouver-area suburb -- a scene frozen in time that the home's owners blame on British Columbia's controversial new tax on foreign buyers.

The in-transition state of the home in Coquitlam has been the status quo ever since its owners learned the house's sale, which they understood was a done deal, was thrown into question by the tax.

The couple is at risk of losing an $80,000 deposit they made to purchase a smaller duplex further east in the city, and reneging on the real estate contract would also open them up to being sued.

"We feel like we've been let down," Heather Nyberg told reporters Tuesday in the family's small backyard as the couple's two young children, aged one and three, played together in the grass.

"I just feel really disappointed that our family and many, many others like ours are being affected by a poorly planned tax that's unfair because it's retroactive."

The B.C. government has said the 15-per-cent tax is aimed at addressing skyrocketing real estate prices in Metro Vancouver, the province's most densely populated region. The levy came into effect Aug. 2, days after it was announced, sparking a frenzy of last-minute activity as buyers and sellers rushed to close deals.

The couple sold their home earlier this year, but the deal isn't slated to close until Sept. 15.

Nyberg said the people who agreed to buy their property had originally provided a local address, but that shortly after the tax was announced she and her husband discovered they were based in China.

She said the buyers' real estate agent won't reveal whether the clients are foreign but has floated the idea of the couple helping to pay part of the 15-per-cent tax. The confusion has created additional uncertainty around the deal, Nyberg said.

Housing Minister Rich Coleman said in an email that the initial adjustment period may be difficult, but the tax will eventually reduce demand from foreign investors until supply catches up to local needs.

"This transition period is expected to be short-lived, and over the long term the additional property-transfer tax will help to ensure British Columbians can continue to raise their families in Metro Vancouver communities," he said.

Nyberg's husband Dan Zimmermann said the new law has put the couple under a lot of strain and uncertainty, which defeats the purpose of selling it in the first place.

"All we wanted to do was reduce the stress and reduce the size of our mortgage, and all of that's been thrown up in the air now," he said, adding that the change was also designed to allow them to spend more time with their children.

"We made the best decision with all the information we had at the time and that's all we can do."

Nyberg said if the sale of the home they bought three years ago falls through, they would likely have to back out of buying the new property because they can't afford two mortgages.

"I've stopped packing. I don't want to move into a duplex then move back three days later. Until we get more information we can't really make a plan," Nyberg said. "We are just really stressed out.

"We'd been doing these weekly drive-bys of our new place so my son can get used to it. We're really excited to join a new community where there are more families. We had been setting up our lives to move and now we don't know what's going on."

Jodie Wickens, an Opposition NDP politician who represents the area in the legislature, said she receives dozens of calls and emails every day from people affected by the tax.

"I think that families that entered into a contract with an understanding shouldn't be unfairly penalized," she said.

"To be impacted by this bill in such a negative way is unfair and unnecessary. It's not putting British Columbians first at all. It's a reactionary way to deal with bad headlines."