As sections of the global economy tip-toe toward reopening, it’s becoming clearer that a full recovery from the worst slump since the 1930s will be impossible until a vaccine or treatment is found for the deadly coronavirus.

Consumers will stay on edge and companies will be held back as temperature checks and distancing rules are set to remain in workplaces, restaurants, schools, airports, sports stadiums and more.

China — the first major economy consumed by the virus and the first to emerge on the other side — has been able to revive production but not demand. The lesson for other economies: it’ll be a stop-start path back toward normal.

There’s also the risk of new flare ups. Some 108 million people in China’s northeast region have been put back under varying degrees of lockdown amid a new cluster of infections. Doctors there are also seeing the coronavirus manifest differently, suggesting that it may be changing in unknown ways.

In South Korea – where the virus was controlled without a hard lockdown — consumer spending remains weak as infections continue to pop up.

Sweden’s highly contested response left much of the economy open, yet the country is still headed for its worst recession since World War II.

That means global policy makers — who have already announced trillions of dollars of fiscal and monetary support — will need to keep the stimulus flowing to avoid yet more company failures and job losses. Federal Reserve Chairman Jerome Powell has warned that a full recovery will need to wait until the scientists deliver, a warning echoed by his Australian counterpart.

“If we don’t get breakthroughs on the medical front, then I think it’s going to be quite a slow recovery,” Australia’s central bank chief, Philip Lowe, said this week. “We’ve got a lot resting on the shoulders of the scientists here.”

Harvard University professor Carmen Reinhart, who is the incoming chief economist of the World Bank, had a similar message. “We’re not going to have something akin to full normalization unless we (a) have a vaccine and (b) — and this is a big if — that vaccine is accessible to the global population at large,” she told the Harvard Gazette. 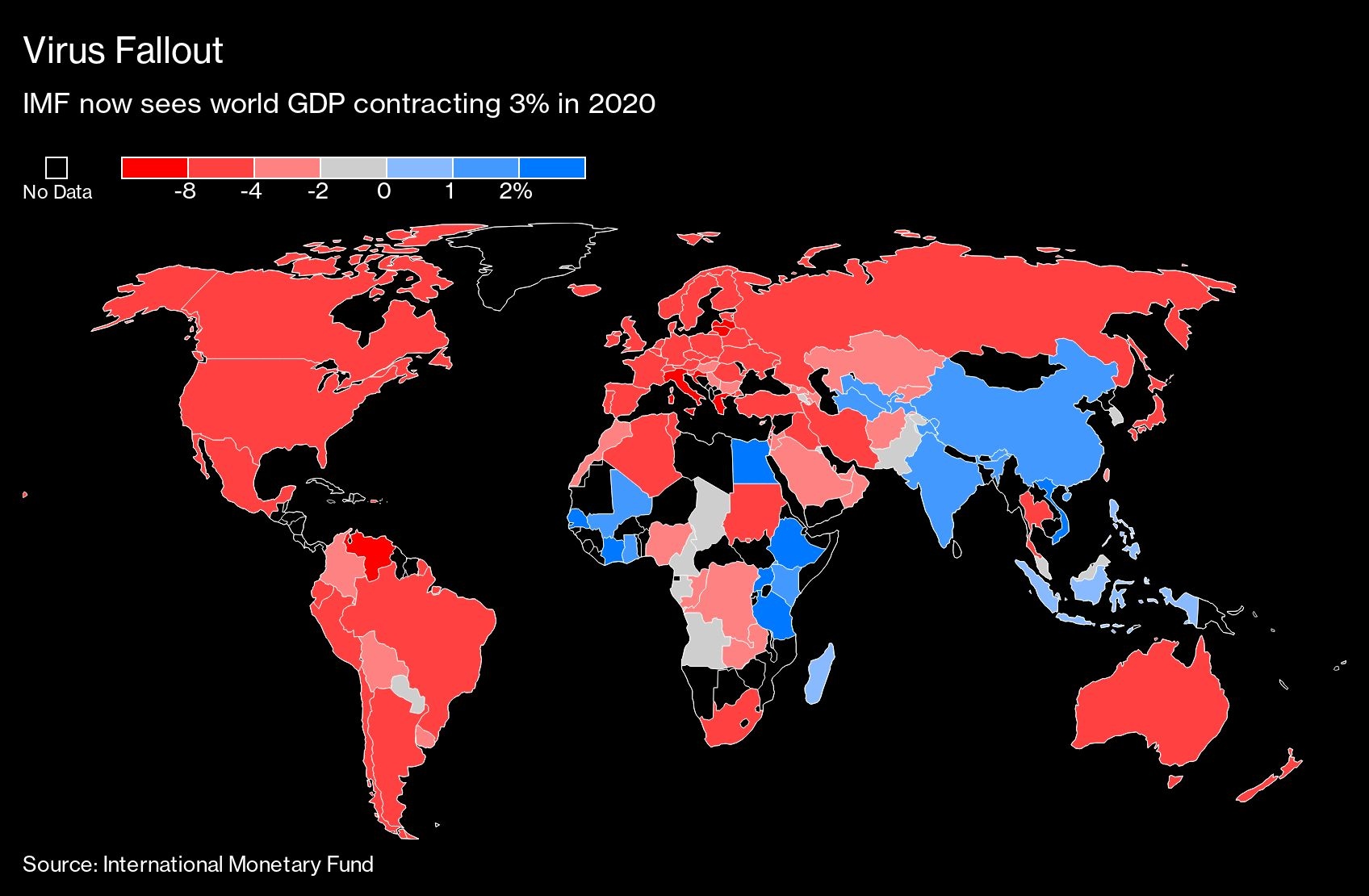 With global infections topping five million and a death toll of over 330,000, there’s an air of desperation for good news on either a vaccine or effective anti-viral.

Shares in Cambridge, Massachusetts-based Moderna Inc. hit a record on Monday on early data from a small trial of the company’s coronavirus vaccine. It gave up some of those gains in later days as investors weighed the early nature of the vaccine data.

A survey of money managers by Bank of America Corp. found the biggest tail risk is a second wave of the virus that means restrictions will have to be imposed again. Only 10% expect a rapid rebound, the bank said in a note titled “V is for Vaccine”.

The race for a cure has a geopolitical edge too. U.S. President Donald Trump has vowed a Manhattan Project-style effort dubbed “Operation Warp Speed” to develop a cure, while China’s President Xi Jinping has pledged to make one universally available once it’s developed.

The fusion of when successful drugs can be found and when economies can get back to normal is dominating sentiment in financial markets.

“There is a global bounty on the virus,” said Stephen Jen, who runs hedge fund and advisory firm Eurizon SLJ Capital in London. “I don’t see how it is wiser for investors to bet on the virus than to bet on science, technology, and unlimited political and financial capital in the world to contain and defeat the virus.”

Health experts caution that the process for developing an effective immunity will take time – possibly years. And even then it will need distribution on an unprecedented scale, according to Anita Zaidi, Director of Vaccine Development and Surveillance at the Bill & Melinda Gates Foundation.

Deutsche Bank AG economists are working on the basis that a vaccine or a cure won’t be widely available for the next year and a half.

In the meantime, the cogs of global commerce are in limbo. The International Monetary Fund has warned the “Great Lockdown” recession would be the steepest in almost a century. More than 1 billion workers are at high risk of a pay cut or losing their job, the International Labour Organization warned in April. World merchandise trade volume is likely to fall “precipitously” in the first half of 2020, according to the World Trade Organization.

Bloomberg Economics estimates the lockdowns triggered a drop in activity of around 30% and their research found that the first steps to relax controls will have a more positive impact on activity than later ones. 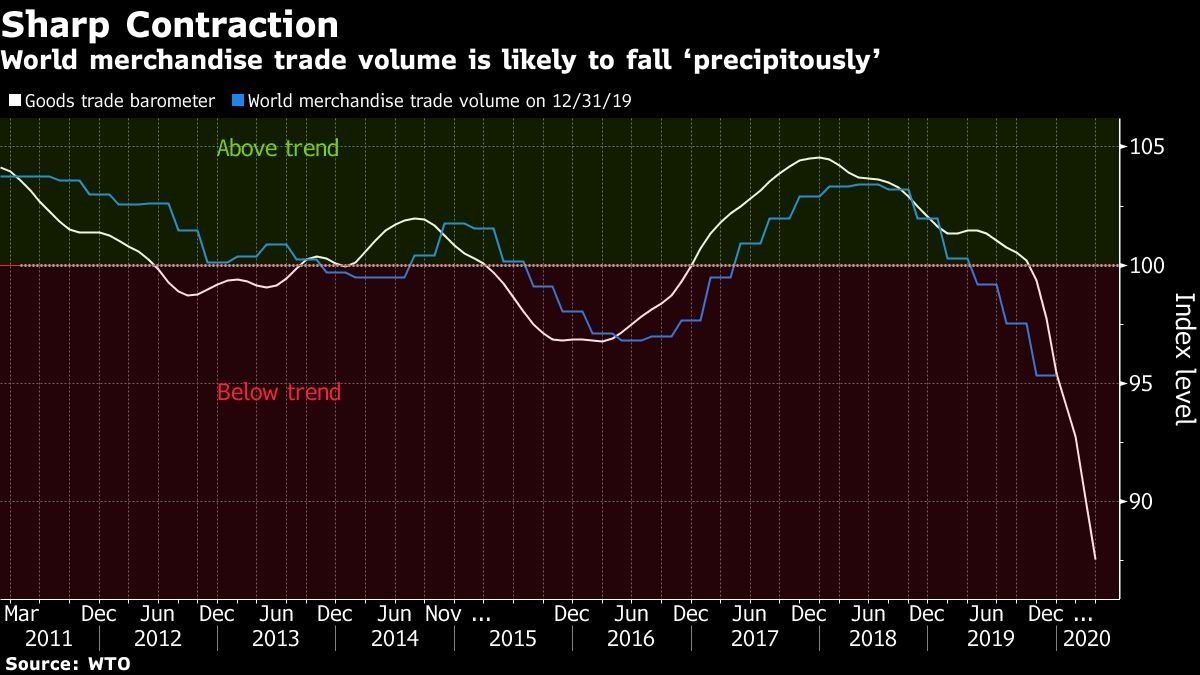 Central bank chiefs, who have had to resort to considering scenarios instead of hard forecasts, are staying in crisis mode.

Powell has pledged to keep using the Fed’s tools. The Bank of Japan, in an emergency meeting on Friday, launched a new lending program worth 30 trillion yen ($279 billion) to support small businesses as a key inflation gauge slid below zero in April for the first time in more than three years. India’s central bank cut interest rates in an unscheduled announcement on Friday to their lowest since 2000. 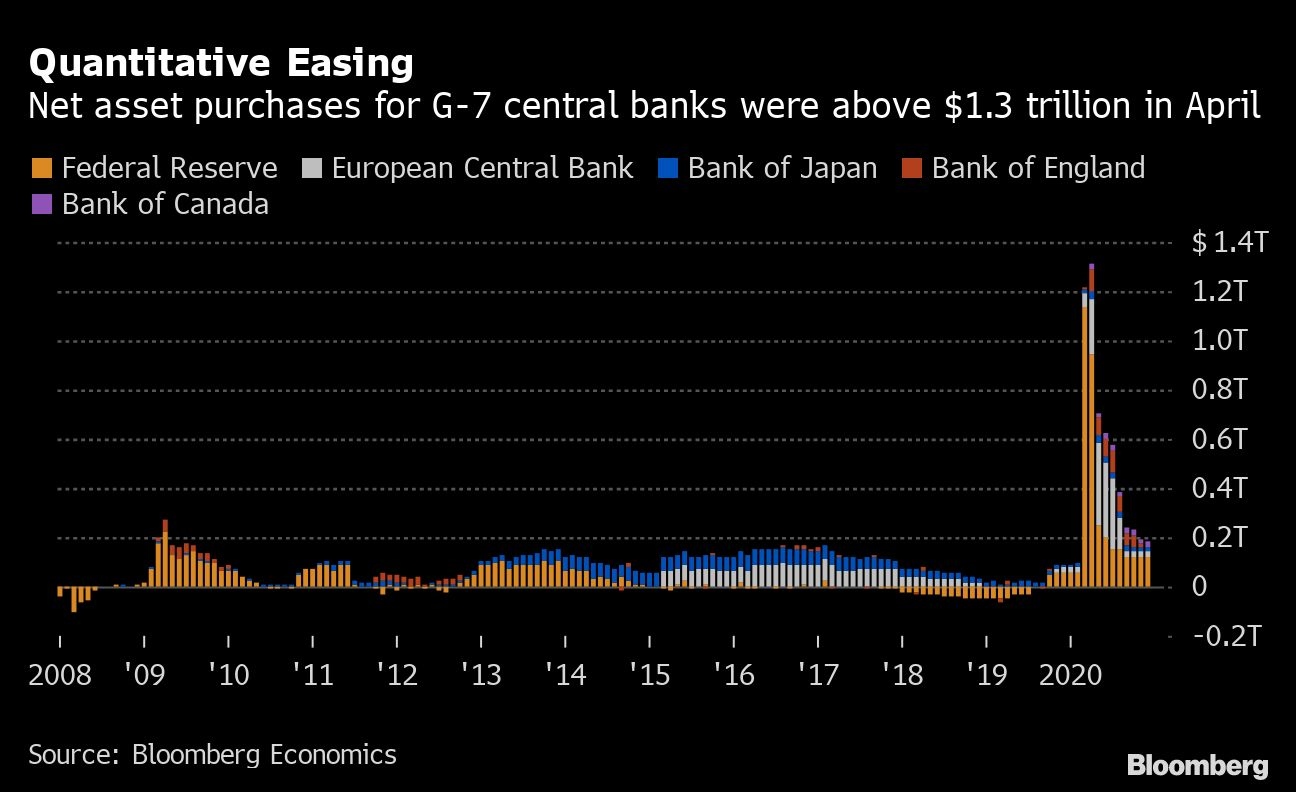 While the world waits for a vaccine, workers employed in areas like tourism will need to be reskilled and shifted to where there’s demand, a process that will take time, said Shaun Roache, Asia-Pacific chief economist at S&P Global Ratings.

“Without a medical solution, either a vaccine or effective therapy, persistent behavior change would lead to large structural shifts in the economy,” he said.

Big employers are already adapting to the new, new normal. Facebook Inc. plans to hire more remote workers in areas where the company doesn’t have an office, and let some current employees work from home permanently. JPMorgan Chase & Co. expects to keep its offices half full at the most for the “foreseeable future.”

The circuit breaker to all of this would be a scientific breakthrough, said Torsten Slok, Deutsche Bank Securities Chief Economist.

“A vaccine would change everything,” he said.