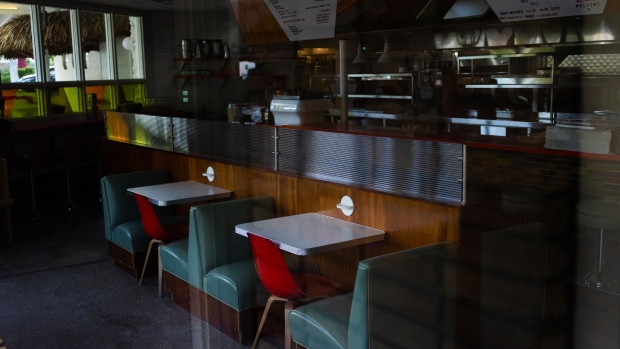 “Economic activity declined in all districts – falling sharply in most – reflecting disruptions associated with the COVID-19 pandemic,” the central bank said in its Beige Book survey released Wednesday in Washington.

The report, prepared by the Kansas City Fed, was based on anecdotal information collected by the 12 regional reserve banks on or before May 18.

The survey showed employment continued to decrease across districts, “including steep losses in most” as social distancing and mandated business restrictions shuttered many firms.

“Although many contacts expressed hope that overall activity would pick-up as businesses reopened, the outlook remained highly uncertain and most contacts were pessimistic about the potential pace of recovery,” the report said.

Still, investors have tended to look through weak readings on the economy toward an eventual recovery. Wall Street stocks remained higher after the release and Federal Reserve Bank of St. Louis President James Bullard argued the economy may already have have bottomed.

“I think April was most likely the worst month because that’s when you had the most shutdown orders in place across many jurisdictions and people were staying at home to the highest degree,” he told reporters on a conference call shortly before the Beige Book’s release. “It could well be we’ve seen the worst of this.”

Restrictions meant to slow the spread of the deadly contagion have pushed more than 38 million Americans out of work over the past two months and caused the economy to shrink by an annualized 4.8 per cent in the first three months of 2020. Economists expect a much larger decline in the second quarter.

The Beige Book reported a mixed dynamic for wages, with some firms cutting pay for workers, while others implemented temporary wage increases for essential staff or to compete with unemployment insurance.

The U.S. Congress in March passed legislation allowing states to extend unemployment benefits and funded a US$600 per week supplement to those benefits that expires at the end of July.

The report noted that declines in consumer spending were most severe in the leisure and hospitality sector, “with very little activity at travel and tourism businesses.”

The central bank said the federal government’s Paycheck Protection Program had “helped many businesses to limit or avoid layoffs, although employment continued to fall sharply in retail and in leisure and hospitality sectors.”

Overall prices in the U.S. showed declines recently. The Consumer Price Index fell 0.8 per cent in April, equaling December 2008 for the biggest drop in records back to 1947.