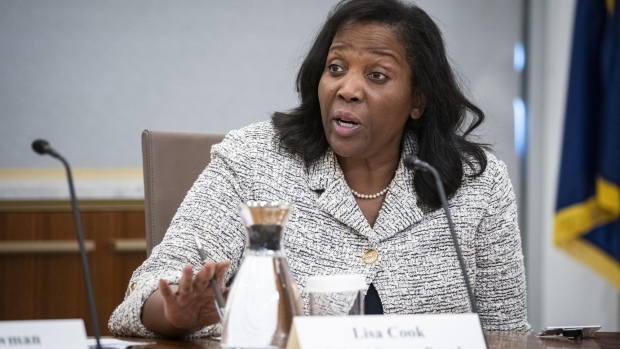 Lisa Cook, governor of the US Federal Reserve, speaks during a Fed Listens event in Washington, D.C., US, on Friday, Sept. 23, 2022. Federal Reserve officials this week gave their clearest signal yet that they're willing to tolerate a recession as the necessary trade-off for regaining control of inflation. , Bloomberg

(Bloomberg) -- Federal Reserve Governor Lisa Cook said she supports the central bank’s policy-tightening path and that further interest-rate increases and a period of policy restriction will likely be needed to bring inflation down.

“With inflation running well above our 2% longer-run goal, restoring price stability likely will require ongoing rate hikes and then keeping policy restrictive for some time until we are confident that inflation is firmly on the path toward our 2% goal,” Cook said Thursday in prepared remarks for her first speech as a governor.

Her comments were as resolute on curbing high prices as those made by her colleagues, dashing the hopes some Fed watchers and economists had of hers being a more dovish voice on the policy-setting Federal Open Market Committee. Cook’s research into economic inequalities and the impact on growth had led some to believe she might push for a less restrictive pace of tightening so as to not cause large disruptions to the labor market.

But Cook said that her work in Russia after the fall of the Soviet Union helped her understand how painful high inflation can be. Other research, in Africa and Europe, taught her the importance on relying on actual data and not just forecasts. She spoke at the Peterson Institute for International Economics in Washington.

“In the current situation, with risks to inflation forecasts skewed to the upside, I believe policy judgments must be based on whether and when we see inflation actually falling in the data, rather than just in forecasts,” Cook said. “Although most forecasts see considerable progress on inflation in coming years, it is important to consider whether inflation dynamics may have changed in a persistent way, making our forecasts even more uncertain.”

Cook said she fully supported the Fed’s front-loading of policy at the past three meetings, where it raised rates by three quarters of a percentage point in each instance.

“Although lowering inflation will bring some pain, a failure to restore price stability would make it much harder and much more painful to restore it in the future,” Cook said.

Cook, the first Black female governor in the Fed’s history, was confirmed by the narrowest possible margin in the Senate, with Vice President Kamala Harris breaking the tie. Republican lawmakers had questioned her commitment to bringing down inflation.