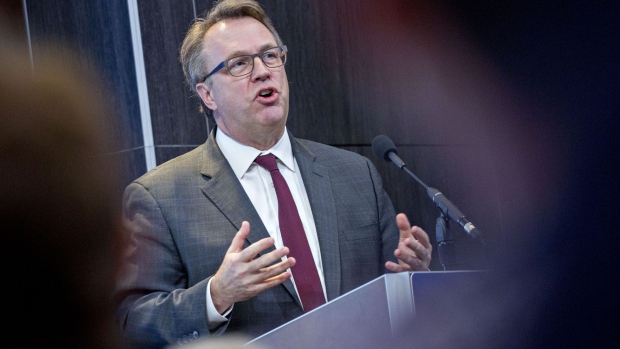 ohn Williams, president of the Federal Reserve Bank of San Francisco, speaks during a Hutchins Center on Fiscal and Monetary Policy event at the Brookings Institution in Washington, D.C., U.S. , Bloomberg

(Bloomberg) -- Federal Reserve Bank of New York President John Williams said interest rates need to rise further and stay high through next year but could be lowered during 2024.

“My baseline view is that we’re going to need to raise rates further from where we are today,” he said Monday during a question-and-answer session following a speech to a virtual event hosted by the Economic Club of New York. “I do think we’re going to need to keep restrictive policy in place for some time. I would expect that to continue through -- at least through -- next year.”

Fed officials are aggressively raising borrowing costs in an effort to tame the highest inflation in 40 years. Following four successive 75 basis-point rate hikes, which have lifted the target for the Fed’s benchmark rate to a range of 3.75% to 4%, officials have signaled they are ready to start moderating the size of their increases as soon as next month.

Investors expect the Fed to downshift to a 50 basis-point move at its Dec. 13-14 meeting with rates peaking around 5% next year.

Chair Jerome Powell has stressed that even as the Fed slows the pace of its rate increases, it will probably need to raise rates to a higher level than previously expected to curb price pressures. He has an opportunity to reinforce that message when he speaks on Wednesday in Washington. Officials in September forecast rates reaching 4.4% this year and 4.6% in 2023. They will update those quarterly forecasts next month.

In his prepared remarks, Williams said policymakers have more work to do to curb inflation, which remains “far too high” despite some recent improvement in supply chain challenges.

“Further tightening of monetary policy should help restore balance between demand and supply and bring inflation back to 2% over the next few years,” Williams said. “It will take some time, but I am fully confident we will return to a sustained period of price stability.”

“Inflation is far too high, and persistently high inflation undermines the ability of our economy to perform at its full potential,” Williams said. “There is still more work to do.”