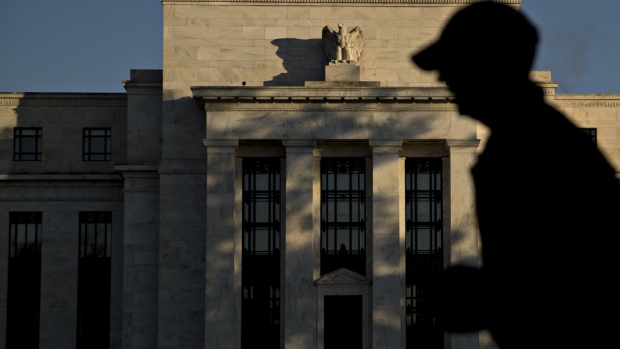 The U.S. economy is expanding at a moderate pace with tight labor market conditions and rising input costs partly due to trade disruptions, a Federal Reserve survey said.

“Tariffs were reported to be contributing to rising input costs, mainly for manufacturers,” according to the Fed report, released Wednesday in Washington.

The central bank's Beige Book economic report was based on anecdotal information collected by the 12 regional Fed banks through Aug. 31. The New York Fed prepared the report, which will be reviewed by policy makers as they prepare for their meeting on rates later this month.

The U.S. economy will expand at about a 3 per cent rate in the second half of the year, economists surveyed by Bloomberg predict. Amid low unemployment, and with inflation at the central bank's 2 per cent target, policy makers are signaling they're prepared to raise interest rates when they meet Sept. 25-26.

The report said labor markets were “characterized as tight throughout the country,” and, despite trade tensions, “businesses generally remained optimistic about the near-term outlook.”

Still, most districts reported concerns and uncertainty about trade tensions. “A number of districts noted that such concerns had prompted some businesses to scale back or postpone capital investment,” according to the report.

Fed districts weighed in with detail on how trade disputes are impacting businesses. “Nearly two-thirds of the firms that offered general comments noted that price hikes and/or supply disruptions had already occurred or were anticipated because of tariffs,” the Philadelphia Fed said in its section of the report. “Some typical responses were that tariffs ‘have put us out of business' on certain products and are a ‘cloud on every facet of our business planning.”'

Despite the price distortions from the trade war and tight labor markets, the Beige Book said that overall price gains in goods and services were “modest to moderate” with “some signs of a deceleration.” Input costs were rising more rapidly than selling prices. Some districts reported firms were using non- wage benefits such as vacation time, flexible schedules and bonuses to attract workers.

“While construction workers, truck drivers, engineers, and other high-skill workers remained in short-supply, a number of districts also noted shortages of lower-skill workers at restaurants, retailers, and other types of firms,” the Beige Book said.

U.S. unemployment stood at 3.9 per cent August, and average hourly earnings increased 2.9 per cent from a year earlier, the most since the recession ended in mid-2009.