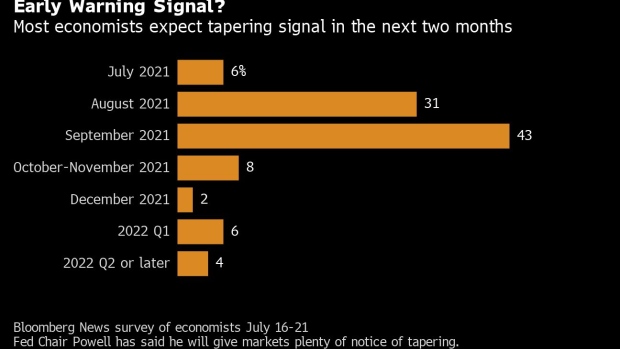 (Bloomberg) -- With the delta variant posing a growing risk to the U.S. economy, Federal Reserve Chair Jerome Powell and his colleagues are likely to emphasize patience on scaling back the central bank’s massive policy support.

The Federal Open Market Committee is all but certain to hold interest rates near zero at the conclusion of a two-day policy meeting on Wednesday and repeat a vow to keep buying bonds at the current $120 billion monthly pace. The panel will release a statement at 2 p.m. in Washington and Powell will hold a press briefing 30 minutes later. No forecasts are scheduled to be released at this meeting.

“The argument to be patient is much stronger and Jay Powell is a patient guy,” said Vincent Reinhart, Mellon chief economist. “They are worried about the pandemic, of course. They are pleased with unfolding economic data, but there is a long way to go.”

The case for delaying any exit from stimulus has also been enhanced by recent market moves. The yield on the 10-year Treasury note has fallen since the Fed last met in mid-June, along with market measures of inflation expectations, as the perceived threat of the delta variant to worldwide growth has vexed investors.

The FOMC has pledged to keep buying $80 billion in Treasuries and $40 billion in mortgage securities until the economy shows “substantial further progress” on inflation and employment as it recovers from Covid-19. Powell said in congressional testimony this month that the threshold “is still a ways off.”

A debate on the mechanics of tapering bond buying will be a central focus of the meeting. This will likely include when to start, how long the process should take and whether to adjust mortgage purchases at a faster pace in light of the hot housing market. There’s also the question whether the Fed would want to complete the tapering process before raising rates, which are currently projected to be on hold through 2022.

The FOMC might come up with a set of formal exit principles, as it did following the previous exit from asset purchases, said Julia Coronado, president of MacroPolicy Perspectives.

“Powell will confirm they have started planning discussions around tapering,” said Coronado, a former Fed economist, adding that more details could be shared in the minutes of the meeting, which are released with a three-week lag.

“The Federal Reserve will maintain a steady policy course this week amid market gyrations and some tempering of economic expectations since the June meeting. Accelerating infection counts attributable to the delta variant mean heightened attention on downside economic risks.”

Another potential venue would be a late-August speech at the Kansas City Fed’s conference at Jackson Hole, Wyoming. Most economists surveyed by Bloomberg expect an early hint of tapering in August or September, when the FOMC will release quarterly forecasts, with actual implementation in early 2022. Powell is likely to deliver the keynote speech at the forum, as he has done every year since becoming chair in 2018.

The FOMC’s policy statement is likely to continue to reflect a positive outlook for growth as well as acknowledge higher inflation, while repeating that price gains largely reflect temporary factors.

The committee could tweak its inflation language following a surge in the consumer price index to the highest level since 2008. One possibility would be using Powell’s characterization from his July 14-15 congressional testimony: “Inflation has increased notably and will likely remain elevated in coming months before moderating.”

“An update to the inflation language that Powell used in his monetary policy testimony would be considered by market participants as being a slightly hawkish tilt -- slightly less confidence that it would be transitory,” said Kevin Cummins, chief U.S. economist at NatWest Markets.

The FOMC could also specifically mention the delta variant, which would add emphasis to the need for patience in removing stimulus.

Powell is likely to acknowledge the FOMC continued its tapering discussions, while emphasizing patience and a commitment to achieving full employment.

The chair is likely to be pressed on inflation following the most recent data, and whether Americans’ expectations are shifting, reflected in gains in recent consumer surveys. He’s also likely to be asked about threats to financial stability from surging housing prices and whether that tips the balance to reducing mortgage-backed securities at a faster rate once the taper begins.

“Powell is likely to have a modest dovish tone” and say the FOMC is “watching and waiting here” before making any moves, said Nathan Sheets, chief economist at PGIM Fixed Income. “Optionality and flexibility seem to be the right course at the moment.”

Powell’s characterization of the recovery may be parsed not only by markets but by the White House. His four-year term as chair ends in February and while he’s deflected all questions on the matter, he has left a clear impression that he’d like to stay in the job. About 80% of economists expect President Joe Biden will make him the offer, according to the Bloomberg survey.