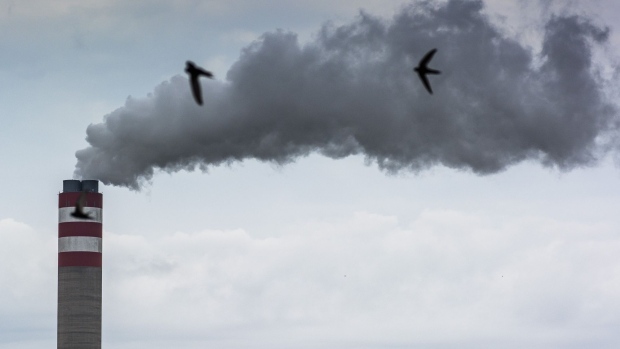 Emissions rise from a tower of the Eskom Holdings SOC Ltd. Kusile coal-fired power station in Mpumalanga, South Africa, on Monday, Dec. 23, 2019. The level of sulfur dioxide emissions in the Kriel area in Mpumalanga province only lags the Norilsk Nickel metal complex in the Russian town of Norilsk, the environmental group Greenpeace said in a statement, citing 2018 data from NASA satellites. Photographer: Waldo Swiegers/Bloomberg , Bloomberg

(Bloomberg) -- Fidelity International unveiled plans to halve the carbon footprint of its investment portfolio by 2030, becoming the latest in a string of fund managers to make such pledges as the industry faces growing calls to stop enabling toxic emissions.

The London-based firm, which manages more than $785 billion, is a founding member of the Net Zero Asset Managers Initiative. The group has committed to achieving net-zero greenhouse gas emissions by 2050, with Fidelity International part of a cohort that needs to provide a 2030 plan ahead of the COP26 climate talks in Scotland next week. Fidelity International said Tuesday it plans to phase out its exposure to thermal coal by 2040, as part of its net-zero pledge.

Asset managers are under intense pressure to use their influence as investors in the world’s biggest corporate emitters to force them to decarbonize. Money managers, including BlackRock Inc. and Vanguard Group Inc., have become frequent targets of climate activists in recent years as younger generations in particular grow impatient at the failure of those in power to stop carbon emissions from rising at a deadly pace.

“As a responsible investor, we must understand the carbon footprint of the portfolios we manage for our clients,” Jenn-Hui Tan, head of stewardship and sustainable investing at Fidelity International, said in a statement. The idea is to “work with the companies we invest in to reduce emissions,” she said.

Fidelity International, which is separate from Boston-based Fidelity Investments, plans to give portfolio companies time to adapt to its tougher CO2 requirements. “Immediately exiting our exposure to more carbon-intensive companies will diminish the impact we can make through active engagement,” Tan said. That said, if companies fail to deliver results in cutting emissions within three years, then Fidelity will divest.

“Divestment is a last report, but it is the only outcome where companies are unable or unwilling to show progress,” Tan said.

Green pledges by the finance industry are likely to face closer regulatory scrutiny as both the U.S. Securities and Exchange Commission and financial watchdogs in Europe make clear they won’t tolerate empty promises. That’s as the market for environmental, social and governance investing balloons to more than $35 trillion, raising concerns around greenwashing.

“I’d be surprised if the SEC wasn’t paying attention to COP26, especially as the SEC comes up with its own rules about climate disclosure requirements,” said Elliott Stein, senior financial litigation analyst for Bloomberg Intelligence in New York. “I also wouldn’t be surprised if the SEC is looking to make sure that climate-related pledges by firms operating in the U.S., including COP26 pledges made, are truthful.”

Fidelity International’s 2030 target will initially be limited to portfolio companies’ direct emissions and those that stem from energy the company buys, so-called Scope 1 and Scope 2 emissions. The investment firm said it intends to add Scope 3 emissions, which measure those tied to end users, once it has access to better data.

The fund manager has developed a new ratings system to monitor how successful portfolio companies are at achieving their net-zero targets. Fidelity International also has committed to cut the net emissions generated by its own business to zero.