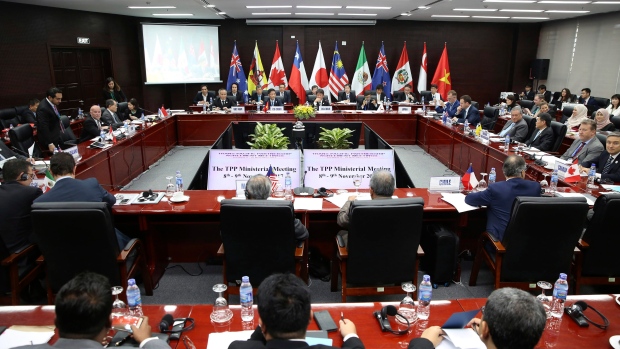 Trade ministers and delegates from the remaining members of the Trans Pacific Partnership (TPP) attend the TPP ministerial meeting on the sidelines of the Asia-Pacific Economic Cooperation (APEC) leaders summit Thursday, Nov. 9, 2017 in Danang, Vietnam. , The Canadian Press

WELLINGTON/SYDNEY - The final version of a landmark deal aimed at cutting trade barriers in some of the Asia-Pacific's fastest-growing economies was released on Wednesday, signaling the pact was a step closer to reality even without its star member the United States.

More than 20 provisions have been suspended or changed in the final text ahead of the deal's official signing in March, including rules around intellectual property originally included at the behest of Washington.

The 11 remaining nations, led by Japan, finalized a revised trade pact in January, called the Comprehensive and Progressive Agreement for Trans-Pacific Partnership (CPTPP). It is expected to be signed in Chile on March 8.

The deal will reduce tariffs in economies that together amount to more than 13 percent of the global GDP - a total of $10 trillion. With the U.S., it would have represented 40 percent.

"The big changes with TPP 11 are the suspension of a whole lot of the provisions of the agreement. They have suspended many of the controversial ones, particularly around pharmaceuticals," said Kimberlee Weatherall, professor of law at the University of Sydney.

Many of these changes had been inserted into the original TPP 12 at the demand of U.S. negotiators, such as rules ramping up intellectual property protection of pharmaceuticals, which some governments and activists worried would raise the costs of medicine.

The success of the deal has been touted by officials in Japan and other member countries as an antidote to counter growing U.S. protectionism, and with the hope that Washington would eventually sign back up.

"CPTPP has become more important because of the growing threats to the effective operation of the World Trade Organisation rules," New Zealand Trade Minister David Parker said on Wednesday.

Last month, Trump told the World Economic Forum in Switzerland that it was possible Washington might return to the pact if it got a better deal.

However, Parker said on Wednesday that the prospect of the U.S. joining in the next couple of years was "very unlikely" and that even if Washington expressed a willingness to join CPTPP, there was no guarantee that the members would lift all the suspensions.

Parker said the deal would likely come into force at the end of 2018 or the first half of 2019.

Governments were quick to tout the economic benefits of the agreement.

"The TPP-11 will help create new Australian jobs across all sectors - agriculture, manufacturing, mining, services - as it creates new opportunities in a free trade area that spans the Americas and Asia," said Steven Ciobo, Australia's minister for trade in an emailed statement.

New Zealand's government expected the CPTPP to boost the island nation's economy by between NZ$1.2 billion ($881.40 million) to NZ$4 billion a year, with beef and kiwifruit exporters among the top beneficiaries of the deal.