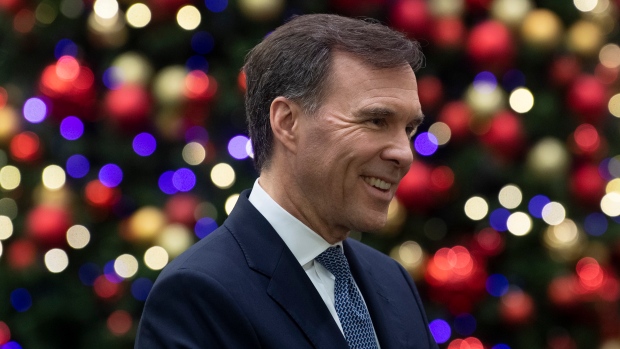 CALGARY - There was “more alignment” than expected with federal Finance Minister Bill Morneau at a pre-budget roundtable with the Business Council of Alberta on Thursday, according to the group's president.

But economic fear that has boosted separatist sentiment in Alberta will likely continue until residents start to see the benefits of completed pipeline expansions and hear strong support - or even pride - from Ottawa for the Canadian energy sector, added Adam Legge.

“I think there's a perception across the country that it's Alberta versus the rest of Canada and that the interests are very divergent,” he told reporters after the roundtable, which was held behind closed doors in downtown Calgary.

“I can tell you that from the business perspectives around the room, there is quite a bit of alignment.”

Morneau is the third senior Liberal politician to visit Calgary in a week after the party was shut out of the province in last fall's federal election. He follows Deputy Prime Minister Chrystia Freeland last week and Jim Carr, special representative for the Prairies, on Tuesday.

All three have said they share interests with Alberta business people in terms of prosperity for the middle class and Indigenous people, as well as being recognized as leaders in environmentally responsible natural resource production, Legge said.

The council is “fiercely federalist” and doesn't support separatism, he said, adding the federal politicians seem to want to understand and try to deal with those sentiments through budgets and policies.

The government has heard the frustration being expressed in Alberta and wants to assure the province that its concerns are being listened to, Morneau said.

“Our overall economy is strong but regionally we have things we need to do together to make sure people in Alberta are confident about their opportunities for today and tomorrow,” he said during a media availability.

The government will continue to invest in a fiscally responsible way while encouraging responsible development of resources and dealing with the country's climate change targets, he said. He welcomed news that some oil and gas companies are adopting carbon neutral targets for their upstream operations.

Morneau declined to be specific on a number of issues, including whether Canadian taxpayers should pay for security for Prince Harry and Meghan, the Duchess of Sussex if they move to Canada.

On provincial requests for changes to the country's fiscal stabilization regime, Morneau would say only that the matter is being examined. Premier Jason Kenney says Alberta is owed about $2.4 billion going back to 2014.

Morneau said he had no updates on when Ottawa will rule on Teck Resources Ltd.'s proposed $20.6-billion Frontier oilsands mine in northern Alberta.