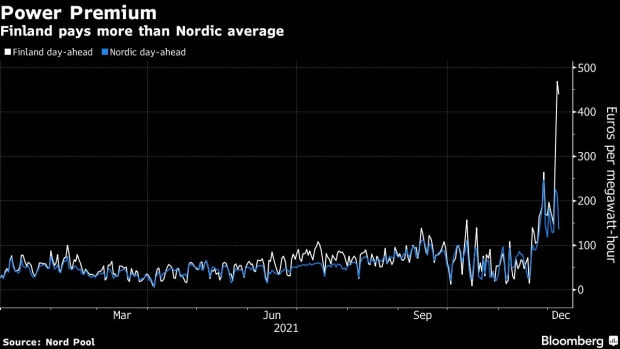 (Bloomberg) -- Just days after Finnish power prices surged to their highest in more than a decade, the market finally got some good news. The Nordic nation is getting ready to push the start button on its newest nuclear reactor.

First due to deliver power to the grid in 2009, the Olkiluoto-3 nuclear reactor owned by Teollisuuden Voima Oyj has seen faster than anticipated recent progress, and the company on Wednesday asked for permission to start the unit. That means the 1,600-megawatt reactor could be connected to the network before June as currently estimated.

The new start date will be given once the authority has granted the permission to make the reactor critical -- or start its chain reaction -- and to run low-power tests, TVO said.

Electricity has cost 15% more in Finland than the Nordic average so far this year, with the nation needing to import as much as a quarter of its peak demand in the winter due to a lack of generation capacity.  A recent cold spell has only added to the woes.

Power for Monday rose to the highest level since a rare winter peak in February 2010 with hourly prices topping out above 1,000 euros ($1,130) per megawatt-hour. Finland imports most of its power from Sweden and Russia.