Grayscale Investments is making a bet that the approval of a U.S. cryptocurrency ETF is not too far off in the future.

The digital-asset management firm has posted at least nine ETF-related positions to LinkedIn, signaling that the firm is anticipating a green light from the U.S. Securities and Exchange Commission for a crypto ETF -- a goal that has eluded U.S. funds for years.

“The race to launch the first bitcoin ETF is heating up,” said Todd Rosenbluth, director of ETF research for CFRA Research. “It’s more of a question on when the SEC will approve a bitcoin ETF, not if.”

U.S. regulators are currently considering several filings for a bitcoin ETF, including ones from VanEck Associates Corp. and Bitwise Asset Management, although the price swings common in cryptocurrenies and allegations of manipulation have derailed similar efforts in the past. Once regulatory hurdles are overcome, the firm that launches the first bitcoin ETF will have an edge over the competition, industry participants say.

“First-mover advantage in the ETF space is tremendous, particularly when the underlying assets overlap,” Rosenbluth said. “Whichever comes out of the gate first will have a leg up.”

“There’s more competition in the marketplace and in markets outside the U.S., in particular Canada,” and that’s “causing folks to think an ETF approval in the U.S. might be likely,” said Zac Prince, co-founder and chief executive officer of BlockFi, which is one of the largest holders of the Grayscale Bitcoin Trust (GBTC). He added that Grayscale’s ETF job postings are “an interesting signal.”

Though Grayscale has filed to create an ETF in the past, the firm doesn’t currently have an active filing with the SEC for a bitcoin or crypto-related ETF. But the firm could roll its US$35 billion bitcoin Trust -- the largest bitcoin fund -- into an ETF. 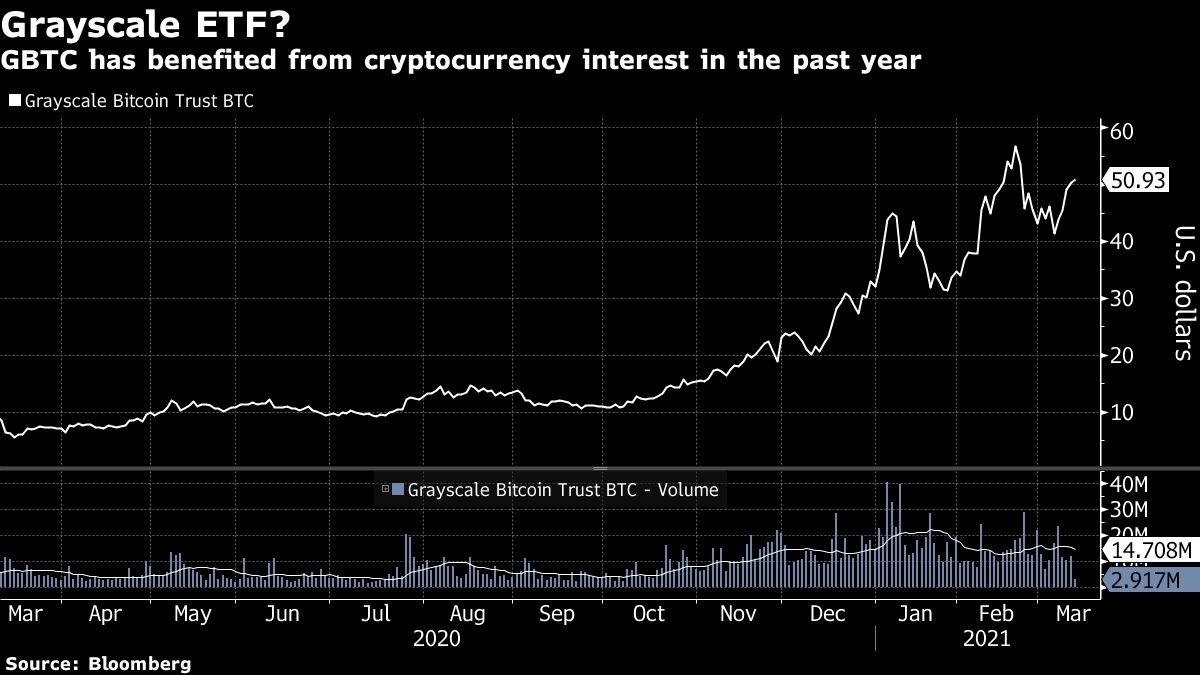 “We’re not able to provide further detail aside from the fact that we are continuously exploring new opportunities, such as an ETF, in response to customer demand,” said Michael Sonnenshein, Grayscale’s chief executive officer. “We were the first to provide exposure to a digital asset through a regulated wrapper, and our goal is to ensure that we lead the market in whatever future product we bring forward as well.”

Typically when a firm develops an ETF team, it builds it up over an extended period of time while preparing to enter the market, according to Rosenbluth. This makes the size of Grayscale’s job postings notable.

“It signifies, one, that they are planning to file for an ETF and that they hope the approval process would be potentially quick and thus don’t want to miss out on hitting the ground running,” he said.