Ford is betting there’s enough life left in the 58-year-old Mustang to help pay for the company’s electric-powered future, in which Chief Executive Officer Jim Farley is investing US$50 billion to build 2 million EVs annually by 2026. With the Mustang, Ford is also offering a plug-in version, the Mach-E, which has seen sales soar 49 per cent this year.

Even so, gas-fueled Mustangs still outsell those powered by electrons. That helps explain why Ford invested in a new version to give the low-slung deuce coupe what it calls “sexy and edgy” styling and its most powerful V-8 engine ever.

“We definitely see a marketplace there and that’s why we’ve invested in this product,” Kumar Galhotra, president of the newly created Ford Blue unit that focuses on traditional internal combustion engine vehicles, said in an interview. “The entire Ford Blue portfolio is the profit engine and will continue to fund future needs for the company.”

Despite the splashy introduction of the seventh-generation Mustang along the banks of the Detroit River at the North American International Auto Show Wednesday, sales of the classic Mustang this year are expected to be less than half what they were six years ago. By 2027, it will be outsold by the Mach-E, according to a forecast from researcher LMC Automotive. 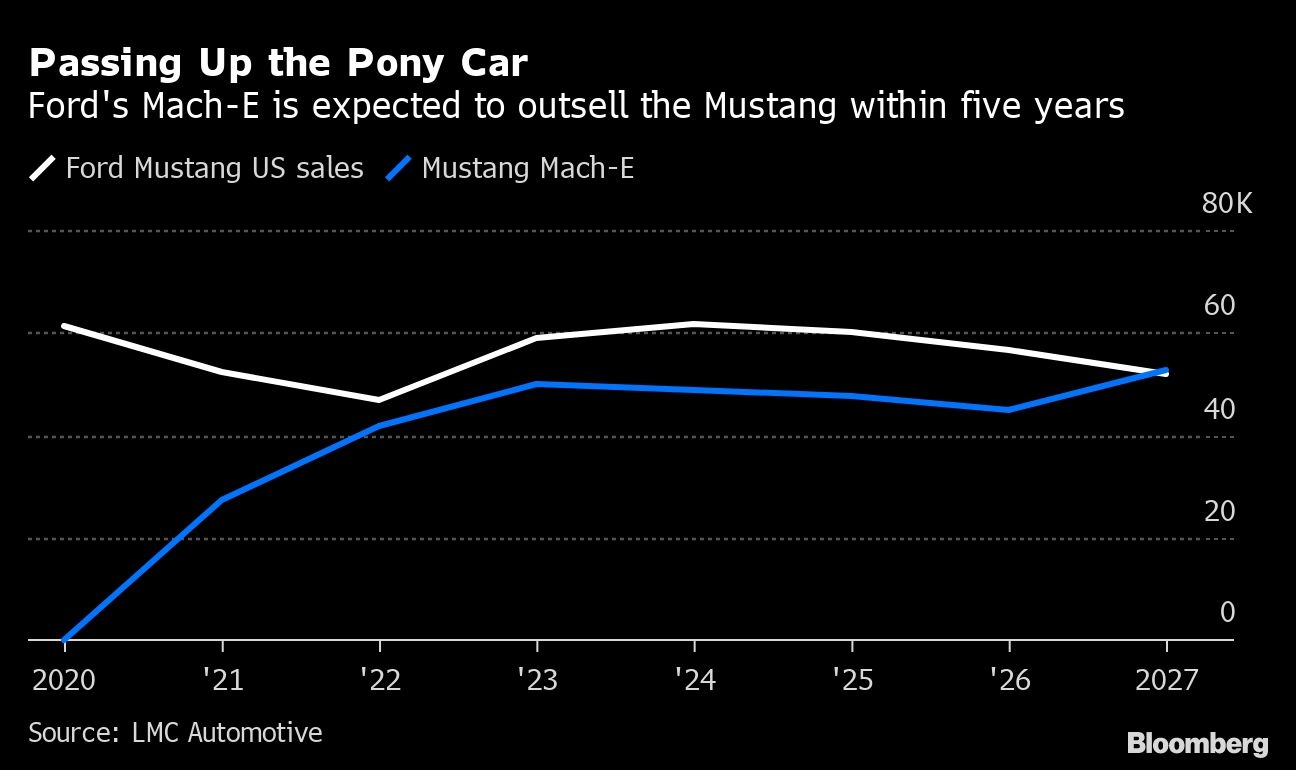 Analysts see this as the beginning of the end for the storied car with a roaring engine under the hood. Ford is already preparing for the day when it puts the old warhorse out to pasture to make way for plug-in ponies.

“People have asked me if this will be your last internal combustion Mustang? And the answer is, ‘we’ll see,’” Bill Ford, the company’s executive chair and great-grandson of the founder, told reporters at the car’s introduction. “The customers will let us know when that day will come. Personally, that day will come with a tear in my eye.”

Farley has said he expects more than half of Ford’s overall sales worldwide to be electric vehicles by 2030.

“Ford is walking a tightrope,” Jeff Schuster, LMC’s president of the Americas said in an interview. “They’ve got a competitive and successful Mach-E and that allows them to slow the transition of the regular Mustang to an electrified version. And they can get some near-term benefit from that.”

That’s because by mid-decade, it appears Ford will have the gas-fired muscle car market to itself. Stellantis NV, maker of the Dodge Charger and Challenger, announced last month it is doing away with its gas-fueled hot rods at the end of next year to make way for electric muscle cars. And General Motors Co. has no plans to build its Chevrolet Camaro past 2025 as it switches to an electric lineup.

“We would expect a certain number of those customers, the ones who truly want that type of a product, to consider Mustang,” Galhotra said of current buyers of the Charger, Challenger and Camaro.

While muscle cars only accounted for 1.4 per cent of the US market last year -- down from 2.1 per cent in 2015 -- they remain a lucrative proposition, selling primarily to wealthy Baby Boomers willing to spend big to feel the rumble of an open throttle. With this Mustang, they can get that feeling before they even get behind the wheel: Its key fob features a button that will rev the engine as they approach the car.

Ford has also carried over the Mustang’s most expensive components -- its two engine options and its mechanical platform -- from the previous version. The automaker’s engineers enhanced, but did not replace, the 2.3-liter 4 cylinder and 5.0-liter V8 engines that have powered the Mustang for years. Ford said the V8 has been souped up to generate more power than ever.

It also introduced a new line of Mustangs it dubbed “Dark Horse” that features a 500-horsepower V8 and can be equipped as a track-ready race car. Bill Ford announced the company will race that car at the 24 hours of Le Mans, the race it won in 1966 that was featured in the 2019 film “Ford v. Ferrari.”

Most of the Mustang’s exterior sheet metal is new, with the exception of its roof and door openings, giving the car a more athletic look. But it’s built on the same chassis that underpins the car’s previous generation.

“Why would we continue to make drastic changes when we can take this existing platform and really further refine it?” said Eddie Khan, the new Mustang’s chief engineer.

The frugal approach to redesigning the Mustang is emblematic of how Ford will selectively invest in gas-burners to help Farley realize his goal of transforming the company’s top-selling combustion engine models, such as the F-150 pickup and Bronco sport-utility vehicle, into the “profit and cash engine” of the company.

“We were very thoughtful about where we invest” on the Mustang, Galhotra said. “The investment had to be where the customers are going to appreciate it the most.”

Farley has pledged to boost margins throughout Ford’s lineup in part by cutting US$3 billion in costs from its combustion engine side of the business. It cut 3,000 employees earlier this month, primarily from its Ford Blue unit, and may cut thousands more.

In a move that may offend traditionalists, Ford deleted the double brow dashboard design that’s been on the car since the beginning. Instead, it installed an expansive, curved touchscreen that flows from behind the steering wheel to the middle of the dashboard and oriented it toward the driver. It also eliminated every knob except the volume dial to appeal to those used to swiping and pinching on their smartphones.

“We’re trying to bring in a new set of customers, from the later millennials to the Gen Z folks,” said Jim Owens, the Mustang’s brand manager, who identified himself as a Baby Boomer. “Our generation is getting older and maybe not buying as many cars as they once used to.”