Ford’s fix for Toronto’s housing crunch? Get shovels in the ground

Ontario Premier Doug Ford is pushing to eliminate housing shortages in Canada’s largest province, as policy makers seek to deflate pricey markets in places like Toronto without triggering a correction.

Ford’s housing minister, Steve Clark, began consultations this month on proposed reforms that would give local governments more control over their own housing mix to unlock supply and attract investment. In a background document released in November, the ministry touted the economic benefits of adding 10,000 housing starts a year, an amount builders estimate would bring supply closer to demand.

Supply side measures are seen as critical to restoring affordability in some of Canada’s largest cities like Toronto, where prices have doubled since 2010. They would also ease pressure on policy makers to implement demand curbs that are seen as unnecessarily disruptive.

“We have to remove the barriers and the red tape that are getting ahead of housing being built at a more affordable cost,” Clark said in a telephone interview, describing the affordability issue as a “crisis.”

There is already growing concern that tighter mortgage regulations and other recent changes may have overshot, given last year’s plunge in transactions. Demand measures are blunt instruments that apply to all markets regardless of affordability, and disproportionately affect low-income households and youth. Supply measures, in comparison, allow markets to continue growing, albeit at a more sustainable pace.

Toronto, along with Vancouver on the Pacific coast, has the lowest price elasticity of any urban market in Canada, meaning supply is the most out of sync with demand, according to a report last year from the federal housing agency.

Developers agree. It takes about a decade and as many as 52 different reports, studies, checklists and plans to complete a development project in Toronto, according to the Building Industry and Land Development Association. The group estimates the GTA needs 50,000 new units a year to meet projected demand, but only about 40,000 are being built on average.

“The issue in our view for the sharp rise in prices and the affordability issue fundamentally is the supply side not being able to adjust quickly enough to demand,’’ Robert Hogue, senior economist at RBC Capital Markets, said by phone from Toronto. “So a big part of the solution is on the supply side. Except you have to be more patient, because it takes a while.’’ He said Clark’s proposals “are the right types of measures’’ to ensure market imbalances get addressed more quickly.

It’s unclear how Clark’s reforms would affect one major contributor to supply bottlenecks: delays to infrastructure projects such as highways and sewer systems. The minister’s proposed changes to the growth plan for the Greater Golden Horseshoe, the swath of cities surrounding Toronto that’s home to a quarter of Canada’s population, deal more with speeding up development approvals and updating zoning and intensification targets, rather than streamlining infrastructure regulations that are seen as excessive and unpredictable. 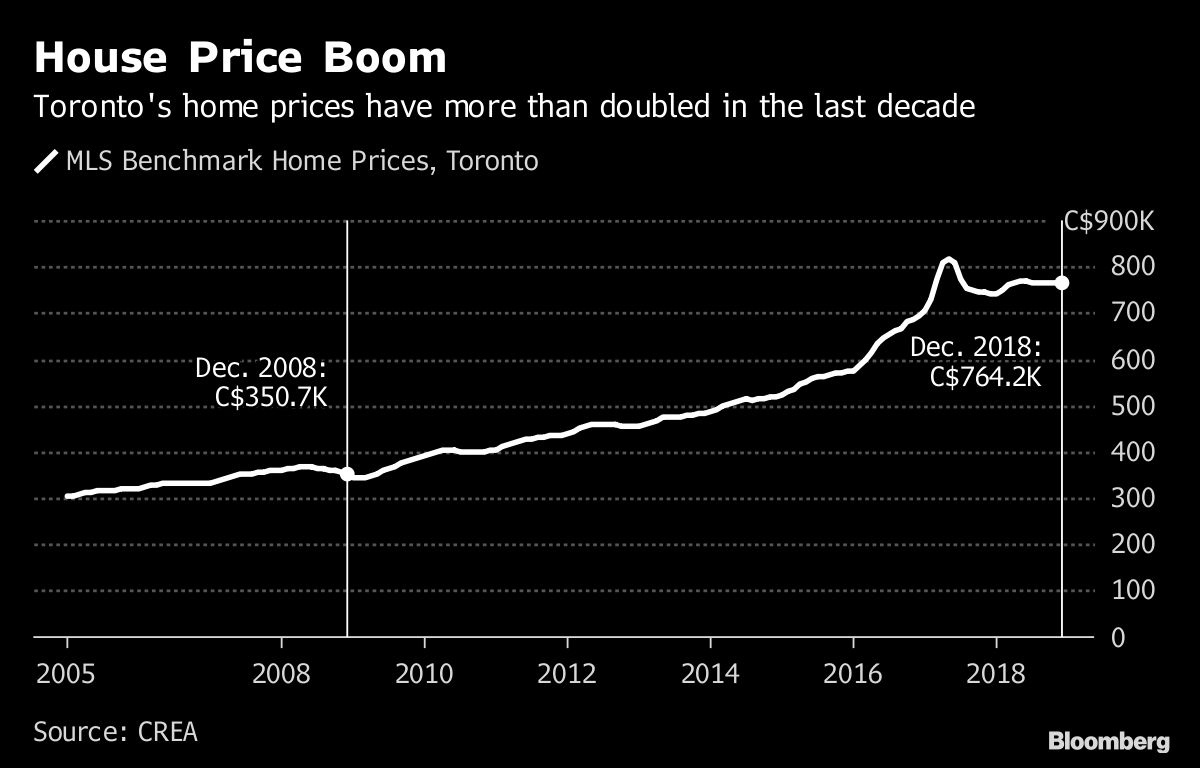 The previous government’s focus on policy ideas just ended up “grinding things down to a halt,” said Joe Vaccaro, chief executive officer at the Ontario Home Builders’ Association. He’s calling on Ford to “clear the decks and get things moving again” by making decisions on several stalled infrastructure projects.

One of those is the Upper York Sewage Solutions Project, a $715 wastewater treatment system that was supposed to service 30,000 new homes in three towns in York Region, a municipality of about 1.1 million people north of Toronto.

“If you can’t flush a toilet, you can’t build a home,” Rabeau said by phone, adding the expected project completion date is now 2026 at the earliest.

After early signals the project would be approved, environment ministry officials told Rabeau in late 2016 there were some outstanding issues concerning the duty to consult indigenous groups. Discussions between these groups, the provincial government and York Region are ongoing, according to a ministry spokesman.

The delay is typical of a broader problem with building infrastructure in the GTA. “We’re growing at a fairly rapid rate, and we’ve got this conundrum that infrastructure has to go through quite a complex approval process,” James McKellar, a professor at the Schulich School of Business at York University, said in a phone interview. “Our ability to bring infrastructure online in a timely way just doesn’t exist.”

Michael Fenn, a former Ontario deputy minister and a visiting fellow at the Ivey Business School’s Lawrence National Centre, says housing should be given particular emphasis when it comes to infrastructure development. “Keeping housing of a variety of types affordable and available is crucial to the economic success” of the GTA and the country generally, he said.

Clark acknowledges housing supply is a “very complex problem,” and he stopped short of saying the environment minister should approve the York sewage project. He nevertheless understands the municipality’s frustration. “That’s an example of something that, if you talk to the region, is taking way too long to get approved,” he said.