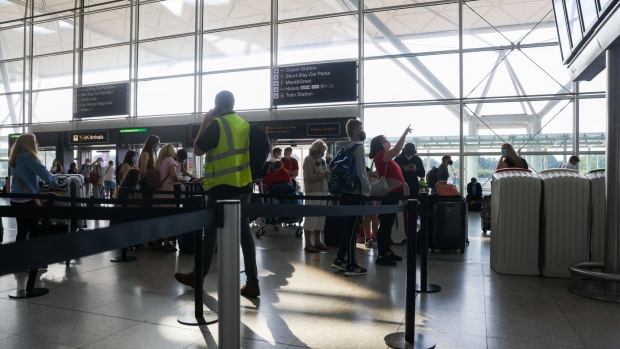 (Bloomberg) -- The French government redoubled its criticism of the U.K. decision to maintain Covid restrictions on visitors from France, while easing them for most European countries ahead of a British reassessment of those rules later this week.

French Transport Minister Jean-Baptiste Djebbari said the U.K. decision last month, which requires travelers from France to isolate for up to 10 days and take two tests, is based on questionable science and urged the government to reverse course quickly.

The dispute comes as relations between the U.K. and the European Union remain difficult. Last month, the U.K. demanded a renegotiation to the Brexit deal governing Northern Ireland -- something the bloc has refused. Conflicts have also cropped up with France over how to deal with migrants and fishing rights.

“I hope this week during their weekly review there will be a positive change,” Djebbari told CNews TV station on Monday, in a reference to a possible assessment of U.K. rules on Thursday. Djebbari said he’s been talking with his U.K. counterpart Grant Shapps every week.

In a separate interview with CNews, French Junior Minister for EU Affairs Clement Beaune said the U.K. restrictions are “a little bit political,” regrettable and discriminatory.

The French anger stems from Britain’s decision to treat France differently from other countries on the amber list in its traffic-light system of travel rules. As of Monday, fully vaccinated Britons, Americans and EU arrivals from amber list countries are exempt from isolation requirements, except for those from France, because of U.K. concern about the prevalence of the beta variant of the virus there.

In the four weeks ended July 13, France recorded 29 cases of the beta variant, representing 0.8% of known infections, according to data compiled by Gisaid, which tracks Covid mutations.

In an interview with a local newspaper on Sunday, French Tourism Minister Jean-Baptiste Lemoyne said he regretted the absence of U.K. holidaymakers during the summer as France’s tourism industry is just clawing back after months of worldwide travel restrictions. France expects around 50 million foreign visitors this year, more than last year but still lower than the 90 million in 2019, the minister said.

Under the U.K. system, people entering from the U.K. from green listed countries must take a Covid-19 test before arrival and take another two days later, but don’t have to self-isolate.

The U.K. government’s Matt Warman defended the travel rules on Sky News on Monday, saying they allow people to make “informed decisions” about where they go on holiday.

Pressure to stop the ever-changing rules is also coming from the airline industry in the U.K., which has been battered by the Covid-19 pandemic and says the lack of clarity is undermining confidence in Brits considering a summer vacation in Europe.

On Sunday, Airlines U.K., an industry group which represents airlines including British Airways, Ryanair Holdings Plc and EasyJet Plc, said in a letter to the country’s Transport Secretary that it was “increasingly concerned that the U.K. is not on a path to a sustainable recovery of aviation, due to the continued restrictions that are being imposed on international travel.”