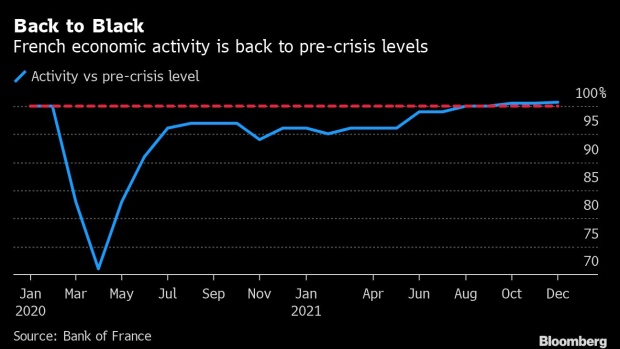 (Bloomberg) -- French economic activity will continue to rise in December, despite another wave of the Covid-19 pandemic and fresh uncertainty over the omicron variant, according the Bank of France.

Completed at the end of last week, the central bank’s monthly survey of 8,500 firms is the first indicator of how businesses in the euro area’s second-largest economy are faring since the new coronavirus strain emerged.

Based on their responses, the bank estimates economic activity was 0.5% above pre-crisis levels in November and will be 0.75% higher this month. That means output for the whole fourth quarter will also expand by almost 0.75%.

The report provides some reassurance on the capacity of European economies to weather the latest virus surge. It follows bullish remarks last week by Bank of France Governor Francois Villeroy de Galhau, who said omicron wouldn’t change the outlook “too much.”

While France late Monday introduced further restrictions -- including closing nightclubs -- to slow the spread of the disease, the moves are designed to have limited economic impact and the government has pledged to compensate those affected.

Even so, the central bank’s survey found that some companies “indicated difficulties in giving a short-term outlook” because of the uncertainties -- particularly in industries like hospitality and air travel.

In addition, hiring difficulties and supply disruptions persist. About half of firms polled said they’re struggling to find staff and 57% of industrial companies said supply snarls have dented activity, according to the Bank of France.