GameStop Corp., the roller-coaster stock championed by Reddit-based traders, tumbled Wednesday in the aftermath of disappointing fourth-quarter earnings and the possibility it may sell additional shares to take advantage of soaring demand.

Shares of the video-game retailer fell 34 per cent to US$120.34 in New York Wednesday, its steepest decline in seven weeks, after reporting profit in the period ended Jan. 30 of US$1.34 a share, excluding some items. That compared with an average projection of US$1.43 from analysts.

Though a new generation of game consoles helped spur purchases, the company didn’t get as big a bump as expected. Net sales fell 3.3 per cent to US$2.12 billion in the quarter, short of the US$2.24 billion estimate. This is its 12th straight quarter of declining sales, according to data compiled by Bloomberg. Still, the console surge helped lift same-store sales by 6.5 per cent, with online revenue up 175 per cent.

GameStop shares have soared more than sixfold this year on frenzied buying by individual investors that kicked off in January. The company has been considering since then whether to sell new shares and whether to increase the size of its program under which it can sell stock at prevailing market prices, it said in its annual regulatory filing late Tuesday. Under the deal signed in December with Jefferies Financial Group Inc., GameStop can sell as much as US$100 million of stock, according to a filing.

The proceeds of a sale would primarily help finance the company’s push into e-commerce, it said. 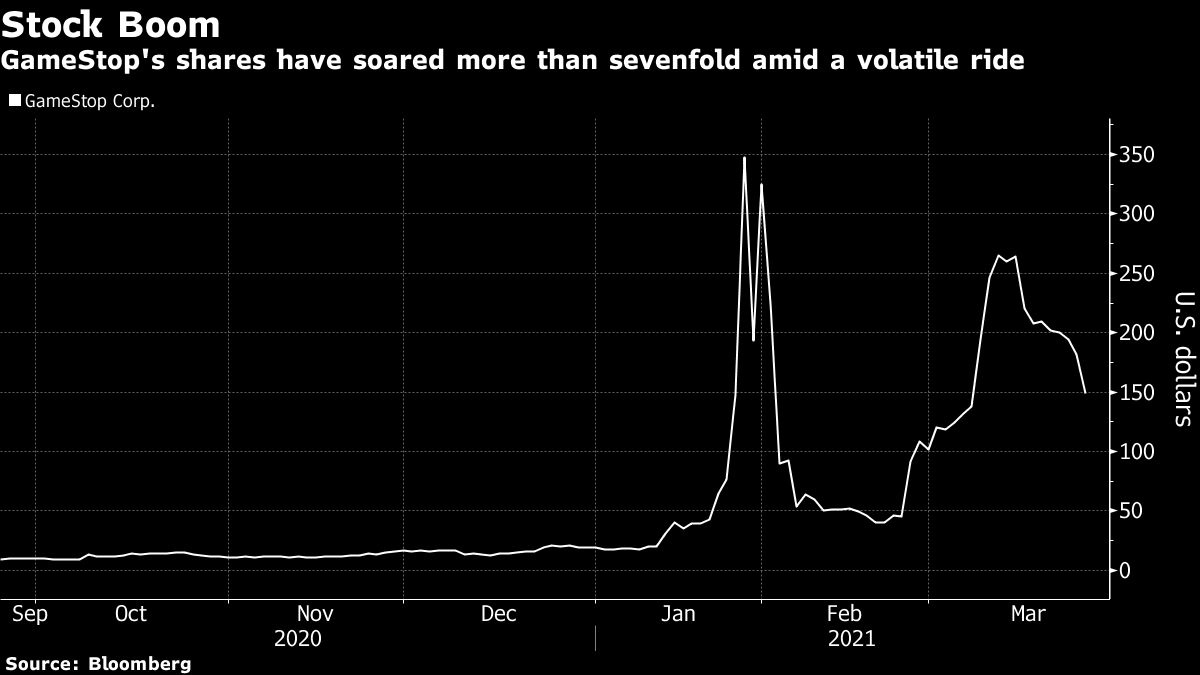 Wedbush analyst Michael Pachter boosted his share price target to US$29 from US$16, citing “excellent execution” from GameStop’s current and former management teams. He still downgraded GameStop to a sell-equivalent rating, saying the stock is disconnected from the fundamentals of the business.

GameStop also announced a trio of new executive hires to help carry out the shift to digital. It named technology veteran Jenna Owens as chief operating officer, bringing on board an Amazon.com Inc. and Google alum. It also appointed two other executives with tech experience as part of a push by activist investor and board member Ryan Cohen to make the brick-and-mortar chain a digital powerhouse.

While investors were expecting more guidance from GameStop on its new strategic direction, the company declined to take questions on a call with investors late Tuesday. Cohen wasn’t on the call. And no forecasts were provided in its earnings statement.

Chief Executive Officer George Sherman said the company will focus this year on customer service and experience -- both key components to a successful turnaround for GameStop.

Despite falling for the last five sessions in New York, the stock is pricing in an “optimistic bright blue scenario (or better),” Baird’s Sebastian said, keeping GameStop at neutral.

--With assistance from Paul Jarvis, Aoyon Ashraf and Tom Contiliano.