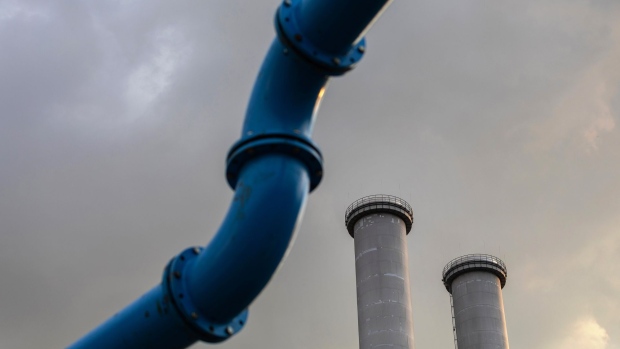 Chimney stacks and pipework at the Mitte Combined Heat and Power (CHP) natural gas power plant, operated by Vattenfall AB, in Berlin, Germany, on Tuesday, May 17, 2022. The European Union is set to unveil a raft of measures ranging from boosting renewables and LNG imports to lowering energy demand in its quest to cut dependence on Russian supplies which accounted for about 40% of the bloc’s gas demand. Photographer: Krisztian Bocsi/Bloomberg , Bloomberg

Benchmark futures for July delivery fell as much as 4%. Russian shipments are expected to remain stable on Friday, even as flows through one cross-border point in Ukraine remains cut off because of the war. Concerns over a payment dispute -- the biggest headache for the market for months -- have also eased with major European buyers finding way to meet Moscow’s demands for rubles and still not fall afoul of EU sanctions.

Europe has boosted imports of liquefied natural gas to tackle any supply issues. Supplies from import terminals in the continent have surged to the highest levels in five years for this time of year.