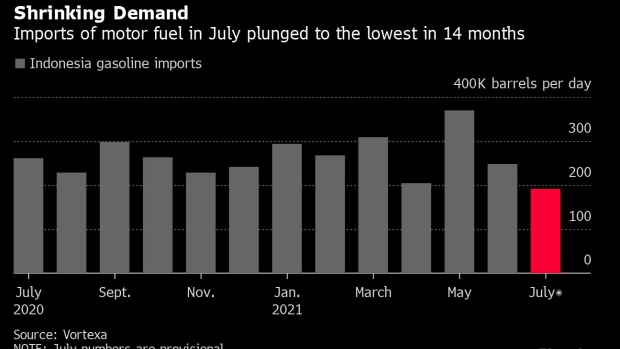 Empty central business district in Jakarta, on July 28. Daily traffic levels across major cities in Indonesia have fallen by about a quarter this month from June. , Bloomberg

Strict curbs on travel amid a surge in virus cases are taking a toll on consumption, with gasoline and diesel usage plummeting during the initial phase of restrictions from July 3-25. Shipments of gasoline into Asia’s biggest importer of the fuel have sunk almost a quarter, according to Vortexa Ltd.

The drop-off in consumption highlights the threat to the energy market posed by the spread of the delta coronavirus variant. Indonesia has surpassed Brazil and India in daily cases and death counts to become a new global virus center, with confirmed cases jumping and fatality numbers hovering near a record.

With demand shrinking, imports of gasoline into the archipelago fell more than 23% from previous month to about 190,000 barrels a day in July, Vortexa’s Asia lead analyst Serena Huang said, citing provisional data. Imports last month were the lowest since May 2020, she added. Diesel imports increased.

So far the slump hasn’t affected Asian margins for converting crude into gasoline, with plunging exports from China and better demand from other markets such a now-recovering India have more than compensated for the loss in Indonesian consumption. However, heavy rains in India and China may crimp regional gasoline demand near term, while tighter restrictions in Thailand will also weigh on the recovery, industry consultant FGE said in a note.

FGE cut its third-quarter gasoline consumption forecast for Indonesia to 520,000 barrels a day from 550,000. Meanwhile, gasoil demand is expected to remain steady at 565,000 barrels a day as industries may continue operations, according to Grayson Lim, a senior oil market analyst at the consultant.

Daily traffic levels across major cities in Indonesia have fallen by about a quarter this month from June, according to Apple Mobility data and Bloomberg calculations. Stage-four restrictions, which impose the tightest measures, were in place in 95 cities and regencies across the most populated island of Java, as well as Bali, until Aug. 2.

Crude imports by Indonesia fell to 275,000 barrels a day in July, from 285,000 barrels in June, according to Vortexa. Imports in April had hit a 16-month high. These purchases are typically made almost two months before delivery.