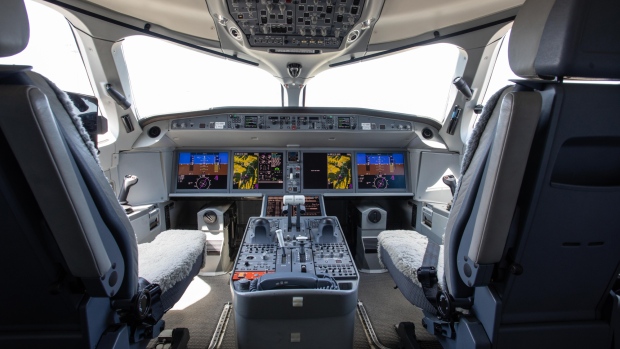 Flight controls sit inside the cockpit of a new Airbus A220 single-aisle aircraft in Toulouse, France, on Tuesday, July 10, 2018. , Bloomberg

GE Capital Aviation Services and Neeleman signed a letter of intent for the purchase and leaseback of nine Airbus SE A220-300 planes that will be delivered in 2021 and 2022. Neeleman previously signed an order for 60 of the planes to supply the new carrier, which has the code name Moxy.

The agreement, announced Monday at the Paris Air Show, moves Neeleman a step closer to inaugurating the airline that he’s said will give customers new ways to customize their flight experience, from legroom to food to price. The carrier, he said, will be low-cost “but not austere.” It will compete in a market populated by the four largest U.S. carriers as well as heavy discounters like Spirit Airlines Inc.

Neeleman, leading a group of investors in the new airline, plans to begin hiring staff in earnest late this year. He has revealed few details of his plan but has said the carrier likely will be based near a technology center other than Silicon Valley. Neeleman’s past startups include JetBlue Airways Corp., Canada’s WestJet Airlines Ltd. and Brazil’s Azul SA.