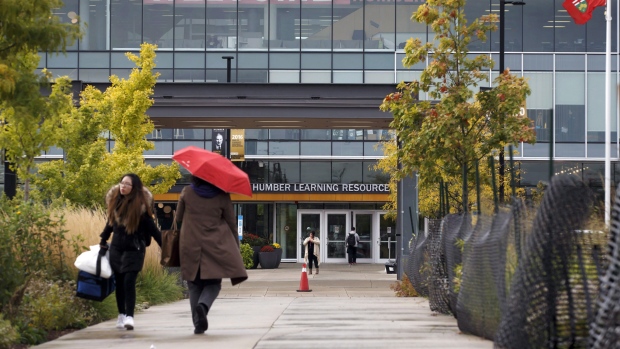 The wage gap has closed between women and men with newly earned PhDs -- though the numbers are less comforting for those without a decade to spend in the halls of higher learning, according to a University of Guelph study announced Tuesday.

The research found that both male and female doctoral graduates earn about $70,000 annually during the first three years after convocation.

"This is the first time that I've seen at any level that there is no discrepancy in earnings between males and females," said co-author Prof. David Walters.

However, the study also suggests that the lower the level of education, the bigger the gender pay gap, and that on average only PhD graduates achieved income equity.

The authors attribute the link between advanced education and equal incomes to strong collective agreements and progressive labour policies in the sectors PhD graduates gravitate toward, such as academia and government.

Lead author Anthony Jehn says men tend to go into more lucrative trades, such as pipefitting or plumbing, whereas women lean more toward hairdressing or cosmetology.

Having children can result in "job segregation," a much bigger culprit for pay inequity than unequal paycheques for equivalent work, said Sarah Kaplan, director of the Institute for Gender and the Economy at the University of Toronto's Rotman School of Management.

Social attitudes and unconscious biases that "expect women to do more at home and take care of the kids" often take effect ahead of the onset of motherhood, which may help explain the income gap right out of the gate, she said.

"We know from the research that women pay a motherhood penalty even before they actually have children themselves," Kaplan said.

Greater pay equity exists for those who can afford to invest in education, a problem that compounds class divisions along gendered lines, said Jehn.

The difference in income between male master's and PhD graduates was virtually non-existent at $69,500 and $70,000, respectively. For women entering the workforce, however, investing in a doctorate meant an average pay bump to $69,000, up from $62,500 for master's graduates.

"This credentialism benefits those who have more social and economic capital, who are able to put in that investment. It does perpetuate a disparity among those who do not," Jehn said.

A "culture of gender inequality" in some male-dominated fields discourages women from entering in the first place, said Jehn, who worked on the study with Walters and Prof. Stephanie Howells.

More than one-third of all male respondents majored in the more lucrative fields of math, engineering or computer science, versus five per cent for women, helping explain the income disparity among bachelor's and master's degree holders.

Pay gaps are smallest among those with liberal arts degrees. The relatively few women who start out in math, engineering and computer science make far less than their male colleagues, the authors found.

Those numbers show that adding a bachelor's degree to your resume prompts a 22 per cent income boost for men, and a 30 per cent jump for women. The difference points to the potential fruits of education  -- particularly for female workers -- but also the financial strain faced disproportionately by women who haven't spent as much time in school.

Other studies highlight the divergent value placed on work associated with men and women, respectively.

"That says something about our society -- what type of work we value and what we don't," said Lauren Ravon, director of policy and campaigns at Oxfam Canada. "Sexual stereotypes die hard."

Even among PhD graduates, however, income gaps persist later in life as "the motherhood penalty and the fatherhood bonus" come into play.

"Education is not the magic bullet," Ravon said.