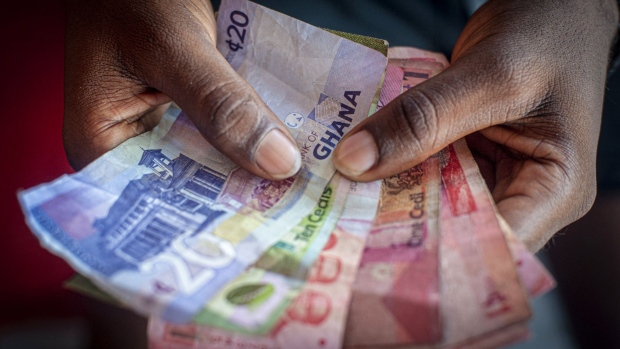 A vendor counts Ghana cedi banknotes at a market in Accra, Ghana, on Tuesday, Oct. 23, 2020. Ghana is missing out on a rally of African bonds as investors fret about an expansion in spending and borrowing ahead of elections in December. Photographer: Cristina Aldehuela/Bloomberg , Bloomberg

(Bloomberg) -- Ghana’s currency dropped past 10 to a dollar for the first time as investors await a financing deal with the International Monetary Fund.

The cedi has dropped more than 38% this year making it the worst performing currency after Sri Lanka’s rupee among 150 economies tracked by Bloomberg.

“Ghana’s assets are facing pressure and this is common across high-yield emerging markets,” said Yvette Babb, a Netherland’s based fixed-income portfolio manager at William Blair International “The move, however, has been particularly pronounced in Ghana.”

Investors have dumped the cedi and the nation’s bonds this year as concerns about the impact of a global slowdown in demand for commodities such as cocoa have risen. Those movements fed an inflationary surge and pushed Ghana to begin talks with the IMF in July over an assistance package of as much as $3 billion.

“We obviously had supporting comments from the IMF MD over the weekend, however technicals remain weak in Ghanaian credit and local currency,” Babb said. “There is no marginal bid for Ghanaian bonds with the street showing a lack of appetite for paper, so when the market sells off, the moves in Ghana’s credit are exacerbated”

The West African nation’s central bank earlier this month increased its benchmark interest rate by the biggest margin on record to 22% to slow the decline. A depreciating currency will add to the import bill of a country that purchases most of its fuel from abroad and has been struggling with inflation at the highest levels since 2003.