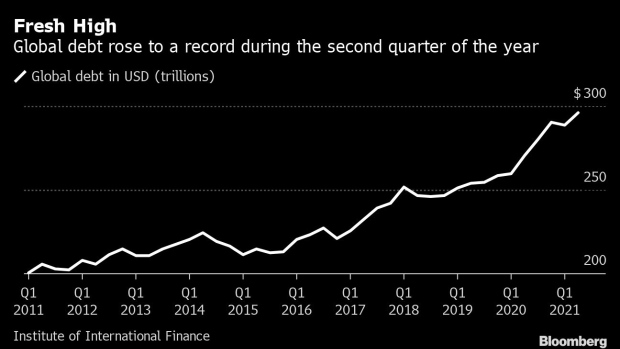 The amount of the world’s outstanding debt swelled during the three months by about $4.8 trillion to a record $296 trillion, according to a report by the Institute of International Finance.

The increase was led by households that added added $1.5 trillion of debt during the first half of the year, driven by the U.S., China and Brazil, with home buyers tapping into low interest rates and stepping up spending as countries emerged from lockdowns. Meantime, government and corporate debts increased by $1.3 trillion and $1.2 trillion, respectively, over the six-month period.

At the same time, the amount of debt relative to the size of the global economy declined for the first time since the onset of the pandemic as growth rebounded. The total debt load stood at about 353% of the world’s annual economic output, a nine-percentage-point drop from the peak during the first three months of 2021.

“The recovery has not been strong enough to bring debt ratios below pre-pandemic levels in most cases,” Emre Tiftik, the director of sustainability research at the IIF, wrote in the report. Excluding the financial sector, only Mexico, Argentina, Denmark, Ireland and Lebanon have a debt-to-GDP ratio below their pre-pandemic level, the report found.

Other findings from the report include: