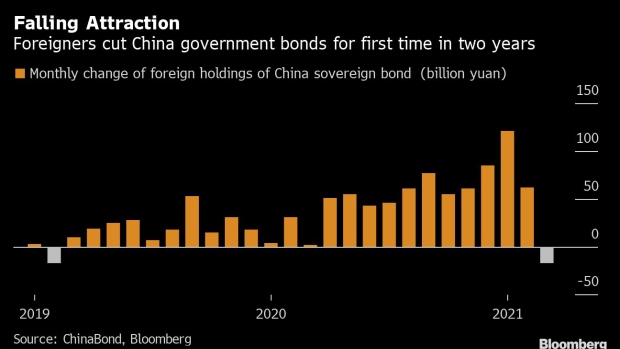 (Bloomberg) -- Global funds trimmed holdings of China’s sovereign debt for the first time in two years in March, as their yield premium over Treasuries narrowed and the government announced plans for more debt sales.

Foreign investors held 2.04 trillion yuan ($312 billion) of Chinese government bonds as of the end of last month, according to data from ChinaBond. That’s 16.5 billion yuan lower than the record amount held in February, according to calculations by Bloomberg.

While Chinese bonds have emerged as a haven during the global debt rout this year, the surge in Treasury yields to levels last seen in January 2020 have dimmed their appeal. Inflows may also slow going ahead after FTSE Russell said last month an inclusion of the nation’s debt into its global bond index will take three years, instead of the 12 months initially envisioned.

“Foreign investors reduced their holdings of China sovereign bonds in March mainly because U.S. Treasury yields rose a lot and some overseas investors switched to that,” said Ming Ming, head of fixed income research at Citic Securities Co. “In addition, foreign holdings had already jumped rapidly, so that also needs to be adjusted.”

Global funds had been piling into Chinese sovereign debt for 24 consecutive months, doubling their holdings over that period as the government loosened ownership restrictions and the securities were included in global indexes. A lack of correlation with overseas bonds have also lured investors, helping them to rise 1% in the first quarter, the only one to do so among the 20 largest global markets,.

The reduction in foreign interest also came after China announced a larger-than-expected quota for the sales of local government debt, with some analysts saying that would pressure the overall market.

The ChinaBond data cover the majority of the interbank market, where most government and policy bank notes are traded. More figures will likely be released by the Shanghai Clearing House in a few days that will cover some credit bonds in the interbank and exchange markets.