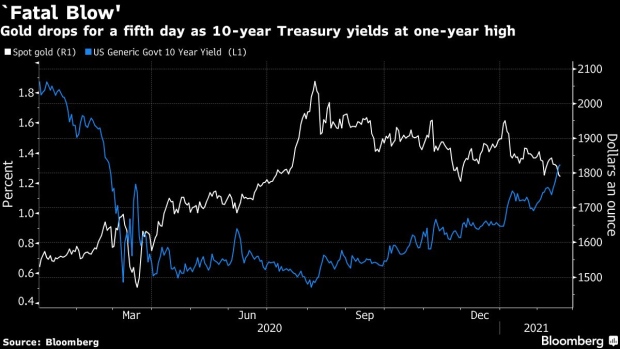 A worker plunges a gold ingot into a cooling bath at the Uralelectromed Copper Refinery, operated by Ural Mining and Metallurgical Co. (UMMC), in Verkhnyaya Pyshma, Russia, on Thursday, July 30, 2020. Gold surged to a fresh record Friday fueled by a weaker dollar and low interest rates. Silver headed for its best month since 1979. Photographer: Andrey Rudakov/Bloomberg , Bloomberg

(Bloomberg) -- Gold declined for a fifth straight day, putting the haven on course for the longest losing run in almost a year, as Treasury yields surged on expectations that the economy is recovering from the pandemic’s impact.

Progress on the coronavirus vaccine front and the slowing pace of infections is driving optimism over global growth, boosting yields and weighing on demand for non-interest-bearing bullion, which has sunk more than 5% this year. Further losses may be on the horizon after bullion’s 50-day moving average retreated below its 200-day counterpart, a so-called death cross pattern.

“A runaway rally in global bond yields has delivered a fatal blow to gold,” said Edward Moya, senior market analyst at Oanda Corp. “Yields are rising on reflation bets, and that is triggering an unwind of many safe-haven trades.”

In other metals, silver and palladium retreated along with platinum, which hit the highest intraday level since 2014 on Tuesday. The Bloomberg Dollar Spot Index rose 0.1%.

“The dollar rebound might not be over if global bond yields continue to rally,” said Oanda’s Moya. “And that could be the bearish catalyst that sends gold down to the $1,750 level.”