Gold headed for its first weekly drop in more than two months after being buffeted by climbing real yields, profit-taking and uncertainty over U.S.-China trade talks.

Bullion is ending a week filled with big price fluctuations on a relatively tame note, trading at more than US$100 an ounce below last week’s record after dropping the most in seven years on Tuesday. Both gold and silver spot prices are heading for the first weekly decline since June 5 and the biggest since March.

The rally in gold, which has surged this year as central banks worldwide took steps to shore up ailing economies and real yields turned negative in the U.S., is encountering some turbulence with the selloff in Treasuries and a stalemate in U.S. stimulus talks. Data Friday showed China’s economic recovery continued in July and U.S. industrial production increased for a third straight month, further dimming the appeal of bullion as a haven. 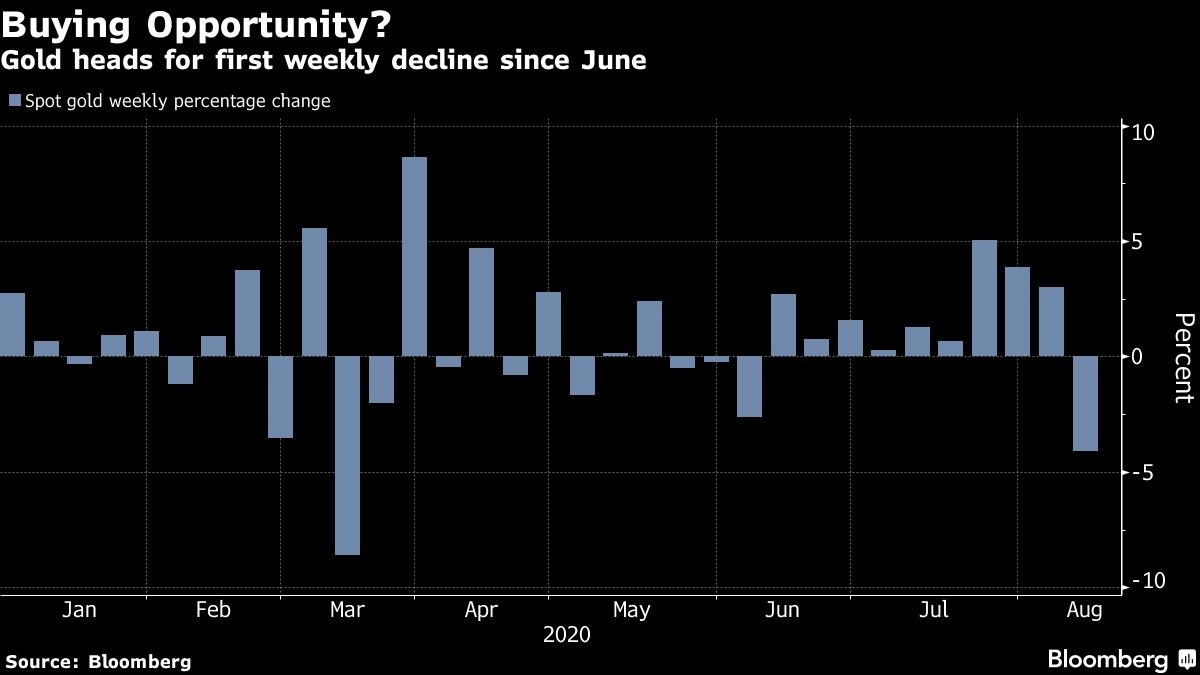 “The washout we saw earlier this week was sort of taking the froth out of the speculation” in gold, Matthew Weller, global head of market research at Gain Capital Group LLC, said by phone.

Even with the decline, gold is still up 28 per cent this year. Credit Suisse raised its gold price forecast for next year to US$2,500, seeing a “perfect storm” of factors pushing bullion to a new high. On Friday, a report showed U.S. consumer sentiment remained weak in August amid expectations for a bumpy ride ahead for an economy coping with an unfettered coronavirus pandemic and widespread joblessness. And a meeting expected between China and the U.S. to discuss progress on the first phase of their trade deal was postponed indefinitely.

An index of the dollar headed for the sixth weekly loss in seven.

“Barring further profit-taking, we think the longer-term uptrend is intact given U.S. dollar weakness and the scale of stimulus and as we expect interest rates to remain low or negative,” Suki Cooper, precious metals analyst at Standard Chartered Bank, said in a note. “Price dips are likely to be viewed as buying opportunities as the macro backdrop remains favorable for gold.”

“All the conditions for a favorable gold price environment are present,” Jake Klein, executive chairman of Australian producer Evolution Mining Ltd., said in a Bloomberg TV interview on Friday. “The geopolitical tensions, the COVID pandemic and the impact that’s having -- unemployment rates are rising -- these are all unfortunate circumstances. Unfortunately, gold is a beneficiary of those times.”

“For me it’s all about fiscal stimulus,” Weller said. “Congress will act when the market forces them to. So if we see stocks come off a bit, that could increase the pressure, and once people start getting evicted and once the unemployment payments drop off severely, I think that’s what could cause Congress to act, and therefore put some wind in the bulls sails when it comes to gold.”