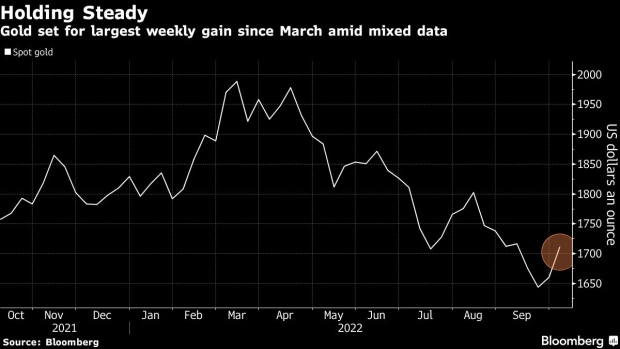 A worker displays gold bars stamped with the company signage at at a gold and silver refinery operated by MMTC-PAMP India Pvt. Ltd., in Nuh, India, on Wednesday, Aug. 31, 2022. Gold held near its highest level in September 2022, as the dollar continued its retreat amid growing expectations that inflation may have peaked in the US. Photographer: Anindito Mukherjee/Bloomberg , Bloomberg

(Bloomberg) -- Gold headed for the largest weekly gain since March, ahead of key US jobs data that will shape expectations about how much more tightening is yet to come from the Federal Reserve.

The precious metal surged past the $1,700 mark earlier this week, after disappointing US data on manufacturing and job openings fueled expectations that the Fed may slow its aggressive rate hikes. Highly anticipated nonfarm payrolls data later Friday is forecast to show employment growth slowing, with a softer than expected print likely to benefit gold.

Though bullion has dipped since peaking on Tuesday, it remains on track for a weekly gain of about 3% as data paint a conflicted picture of the US economy. The metal was steady on Friday, while outflows from exchange-traded funds have slowed significantly this week.

Five Fed officials on Thursday delivered a resolutely hawkish message that inflation is too high and they won’t be deterred from raising rates by volatility in financial markets. Still, the dollar and Treasury yields have declined from highs reached last month, an indication traders see their stance softening eventually.

“The market is starting to look for a slowdown in the US economy, and the Fed will eventually react to that,” said George Cheveley, a portfolio manager at Ninety One.

That would benefit gold, which has slid about 17% from a year-high in March under pressure from the Fed’s hawkish policy. Higher Treasury yields tend to hurt gold, which bears no interest.

Spot gold edged lower to $1,712.22 an ounce as of 9:15 a.m. in London, after slipping 0.2% in the previous session. The Bloomberg Dollar Spot Index was steady, following Thursday’s 0.7% gain. Silver and platinum gained, while palladium fell.