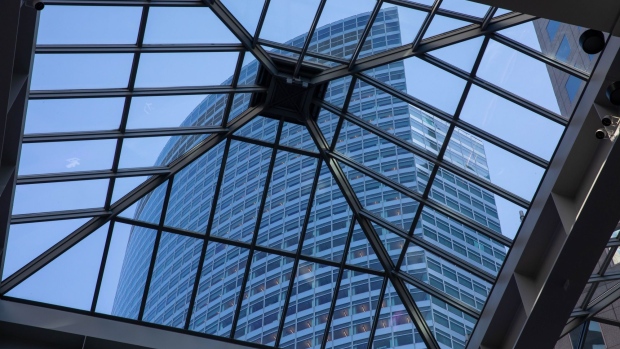 (Bloomberg) -- After Wells Fargo & Co. became the first of the largest U.S. banks to do away with mandatory arbitration for sexual-harassment complaints last year, Goldman Sachs Group Inc. is being urged to take steps in the same direction.

Goldman faces a vote at its annual meeting later this month on whether it should publish a report on how its mandatory-arbitration policy impacts employees and workplace culture. The bank is asking shareholders to vote against the proposal, filed by the Nathan Cummings Foundation, while prominent shareholder-advisory firm Glass, Lewis & Co. is recommending that investors vote in favor.

Forced-arbitration policies have come under scrutiny in the wake of the #MeToo era as being one of many ways companies prevent complaints from coming to light. Facebook Inc., Alphabet Inc.’s Google and Microsoft Corp., have done away with mandatory arbitration for sexual-harassment claims in recent years. Wells Fargo followed last year after discussions with investors. Still, the practice remains widespread on Wall Street.

Goldman -- which, like most of its rivals, has only ever been run by men -- is fighting one of Wall Street’s biggest class-action discrimination cases. The lawsuit was brought more than a decade ago by women who say the firm let managers make biased pay decisions and denied opportunities. The bank has tried to send the women into arbitration, though the plaintiffs said earlier this year they expect a trial in early 2022. Goldman isn’t alone: Morgan Stanley’s former head of diversity, Marilyn Booker, sued the firm last year over “systemic racial discrimination” against African Americans at the bank, claims that the firm has said it will fight.

Goldman said in its proxy statement that a report about its mandatory-arbitration impacts is unnecessary. Disputes are best resolved in arbitration, which provides mutual benefits to the firm and employees, such as speedier resolutions, lower costs for both parties and a lack of limitations on rights or remedies, the bank said.

Goldman said that it has a “zero tolerance” approach to harassment and discrimination, and has “robust firmwide controls” in place to “encourage reporting and prevent and address employee misconduct.” The firm has enacted programs and training focused on workplace conduct, it said.

Patrick Scanlan, a spokesman for New York-based Goldman Sachs, declined to comment beyond the proxy.

Still, Glass Lewis said more information about how Goldman’s mandatory-arbitration policies may impact employees who bring claims will help assure workers and shareholders that issues are being addressed by the board and management, especially in light of pending litigation at the bank.

“Particularly in the #MeToo era, issues of misconduct, especially those that are not handled expediently and with respect to employees, can result in this potential reputational harm,” Glass Lewis said. “This requested disclosure will bring an additional benefit of providing reassurance to current and potential employees who may have concerns regarding how the company’s policies may affect any claims of harassment that they may have.”

Goldman’s annual meeting is on April 29.