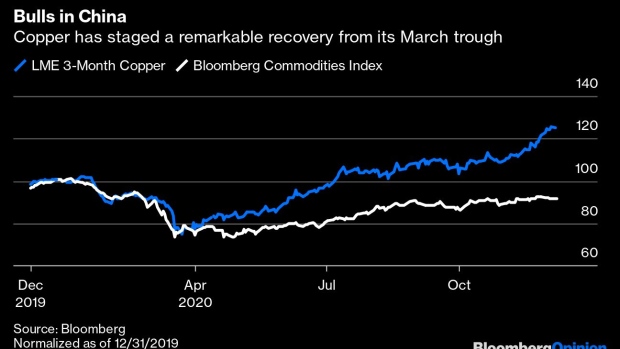 The Bund Bull stands in Shanghai, China, on Wednesday, Jan. 4, 2017. After defying skeptics with solid growth last year, China aims to do the same again in 2017. , Bloomberg

(Bloomberg Opinion) -- The metal bulls are charging. Goldman Sachs Group Inc., which sees a commodities rally ahead on a par with the 2000, says copper could test its record high of just over $10,000 by 2022. The metal has already surged to almost $8,000 this year. Nickel is also on a tear, zinc has climbed more than 50% since March, and iron ore is closing in on $150 a ton.

The post-Covid future does look rosy. Only, we’re not there yet.

Exuberance is only natural, to some extent. The vast majority of us will be glad to see the end of a year spent in varying stages of lockdown. We are all focusing ahead. In commodities terms, that translates into looking through the next few months of winter Covid-19 surges, extra closures, vaccine distribution delays and other hiccups, into a world where life returns to normal.

The optimism is also grounded in reality. There is no question that things are looking up for commodities, and particularly base metals. There is significant government spending globally, the U.S. dollar is weak and monetary policy is loose. Industrial and consumer demand will recover. Supply, meanwhile, will probably struggle to keep up with something close to a V-shaped recovery, after a long period of frugality following the splurge of 2012 and 2013.

Copper is a good example of what’s at stake. The red metal has had its sharpest rally in a decade, rising more than two-thirds from its March lows. That’s largely thanks to China, where strong demand, infrastructure spending and government stockpiling have offset weakness elsewhere — even if imports have moderated of late. The State Reserve Bureau has added as much as 500,000 tons of copper inventories in 2020, according to analysts at Jefferies Group LLC.

Appetite is expected to increase globally as other economies bounce back, and copper-heavy green stimulus plans kick in, at a time of low inventories. Demand may exceed output. Glencore Plc, a major producer, last week put the copper project pipeline at pre-supercycle lows. Goldman sees the tightest conditions in a decade, and others too, to a greater or lesser extent, project deficits ahead.

Yet there’s a risk that the commodities market is paying more attention to the light at the end of the tunnel than to the darkness before we get there, as Vivek Dhar of Commonwealth Bank of Australia puts it. The road is still long and bumpy, even for copper.

For a start, green shoots of recovery seen in the summer and autumn are wilting as winter sets in and Covid case numbers rise. U.S. Federal Reserve Chair Jerome Powell has been among those warning of challenges and uncertainties in the near term as outbreaks widen in the U.S. and beyond. In Europe, a second wave of infections and lockdowns is hurting — even if restrictions are less stringent than the first time around.

While vaccine approvals are undeniably good news, inoculation on a scale that will dent hospitalizations and deaths is some way off. Vaccines won’t lead to automatic lifting of all travel and other restrictions. That will take months, or more.

Then there’s China, which has single-handedly held up global commodities demand this year, but where appetite may be cooling. That doesn’t mean a drop. Still, uncertainty surrounds exactly what the end of stimulus-fueled growth will look like, and indeed the exact shape of consumption in an economy attempting to hit President Xi Jinping’s net-zero emissions target. There are also questions over the extent of debt risks and what that may mean for the world’s largest consumer of commodities, as non-payments rise. Five state-linked companies — from a chipmaker to an auto company with ties to BMW AG — have defaulted in the onshore bond market this year. That’s the most since 2016.

Market bulls are no doubt right about where we end up in a year or so. Goldman may well be correct in asserting that green spending can rival the investment splurge of 20 years ago, and a consumer boom is possible. We just need to see it happen.