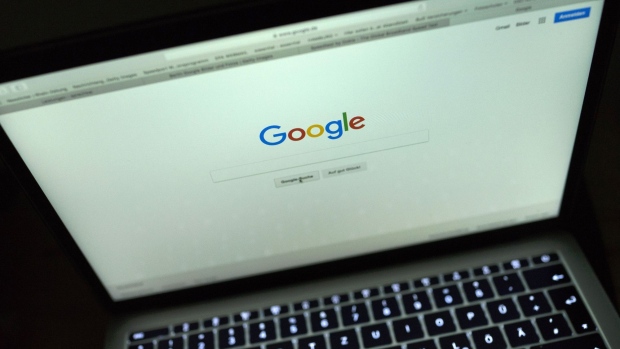 BERLIN, GERMANY - MARCH 03: In this photo illustration the website of Google is displayed on a laptop on March 3, 2018 in Berlin, Germany. The left-wing organizers of the event cited Google's profit-oriented mass collection of personal data about people as well as the gentrification locals fear will accelerate should the Google Campus open. Google is reportedly planning to open a Google Campus, which is meant to create a venue for startups and technological exchange, this summer in a building that once housed an electric relay station in the heart of Kreuzberg. (Photo by Carsten Koall/Getty Images) , Photographer: Carsten Koall/Getty Images Europe

(Bloomberg Opinion) -- If you lived west of the Mississippi at the dawn of the 20th century, there must have been a moment when it became clear that the Wild West of old was no more. Perhaps it was the arrival of the railroad, or the last stagecoach robbery or the introduction of a federal income tax.

For the web, that moment might just be Google’s decision on Tuesday to end third-party tracking of people’s browsing habits. It’s a move that will better protect user data, but it also provides an opportunity for the Alphabet Inc. unit to extend its dominance of online advertising.

The advertising technology industry has long been a Wild West of its own, largely thanks to the proliferation of seemingly innocuous little files known as cookies, which nourished hordes of startups feeding on the data they generated. When internet users visit a website, files are deposited on their computers that record the visit. Many sites, if not most of them, include cookies from other firms, which means they can track users’ progress across the web.

As that data accumulates, and users peruse new shoes on one website, film reviews on another, train tickets on a third and so on, adtech firms are gradually able to build a profile of their interests, spending power and demographic attributes. The problem is that users often have no idea who exactly is gathering that personal data. In many ways, adtech is the lubricant for the modern internet — its proceeds pay for much of the web’s operating costs.

In 2017, Apple Inc. started blocking third-party cookies on its Safari web browser to stymie the practice. Last year, Mozilla Corp.’s Firefox did the same. Google is finally now following suit with Chrome, which has significantly more users than its competitors.

The decision is a no-brainer for the search giant, which regularly asserts that search terms are its most useful tool for targeting relevant ads. And ever since the European Union’s General Data Protection Regulation, cookies have been dying. The rules included measures that made it easier for users to opt out of cookie-based ad-tracking. Within three months of the legislation coming into force in 2018, the number of third-party cookies found on news websites in the region fell by 22%, according to the Reuters Institute. Similar digital privacy legislation is being rolled out around the world.

But GDPR also made life harder for a cohort of second-tier adtech players trying to compete with the likes of Google and Facebook Inc. The regulation’s provision to prevent data being shared wantonly with third parties seemed to give the tech giants an opportunity to tighten their control over user data. Rivals such as Sizmek Inc. have since gone bankrupt.

Putting an end to third-party cookies could have a similar effect — cement Google’s control at the expense of rivals. After Tuesday’s announcement, shares in French adtech firm Criteo SA fell as much as 14%. After all, if you’re using Chrome, Google is still likely to know your browsing habits. Data that advertisers might formerly have obtained from those third parties might become most readily available from Google itself.

It’s a move that could appear anticompetitive and might explain why Google isn’t enforcing the change immediately but instead phasing it in gradually over two years — twith feedback from the adtech “ecosystem,” as director of Chrome engineering Justin Schuh wrote in an accompanying blog post. That approach might take the wind out of accusations of brazen anticompetitiveness.

For publishers, it will most likely accelerate the shift toward requiring users to register for their websites because that will be the best way to determine who exactly is browsing their content and thus how to serve appropriate ads. That could become a problem for sites that depend on sporadic visits more than they do a loyal audience.

There are still other channels where adtech’s worst practices remain rife, through the use of digital fingerprinting, mobile apps and other means. But the industry’s gunslinging days are nearing an end, and Google is the sheriff.

To contact the author of this story: Alex Webb at awebb25@bloomberg.net