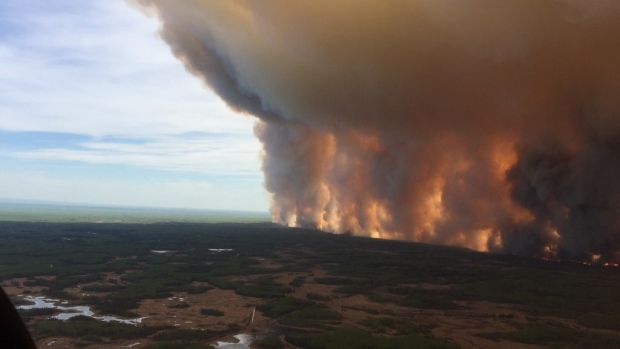 HIGH LEVEL, Alta. -- A northern Alberta town and a nearby First Nation are being evacuated due to the threat of an encroaching wildfire.

Thousands of people are being told to leave High Level, as well as the Bushe River Reserve, via Highway 58 east of the communities since highways south and west have already been closed due to the blaze.

The Chuckegg Creek fire has been burning for several days, but grew substantially from Sunday, when it covered about 25,000 hectares, to an estimated 69,000 hectares on Monday.

At the time the evacuations were ordered, the flames were only about three kilometres from High Level.

Reception centres for evacuees have been set up in High Prairie and Slave Lake, and officials are arranging transportation for residents who can't get out on their own.

McAteer said the evacuation is being co-ordinated in zones. People should expect to be away for 72 hours.

She said about 4,000 people from High Level were affected by the order, and another 750 from Bushe River.

Earlier in the day, the town warned on its website that people should fill up their vehicles and collect important documents in case they were ordered to leave at short notice. Power has also been knocked out because of the fire, but was expected to be restored Monday evening.

Mandatory evacuation orders for residents south and southeast of the town, and south of Bushe River, were issued early Monday.

Provincial officials said the evacuation of High Level would take a maximum of eight hours, but since some people had already left, they said it could be completed sooner.

Alberta Health Services said it had evacuated 20 patients from the Northwest Health Centre in High Level and relocated them to other communities.

Scott Elliot, an incident commander with Alberta Wildfire, told the news conference that the wildfire was mostly headed away from High Level, but that city officials decided it was best for everyone to leave since the flames were so close.

"If there was a subtle shift in the wind direction, that would increase the likelihood of rapid fire spread towards the community," Elliot said.

Crews are using sprinklers on structures on the edge of the town closest to the fire.

McAteer said people were complying with the evacuation order.

"People are of course afraid because they remember the wildfires of Fort McMurray, but we talked to a lot of the residents and reaffirmed that we were being proactive," she said.

A 2016 wildfire in Fort McMurray, Alta., destroyed one-tenth of the city and some 88,000 people were forced from their homes.

Slave Lake, where a reception centre has been set up for residents of High Level, was also evacuated because of a wildfire in 2011 that destroyed parts of the community.

The Alberta government issued a fire ban and restricted off-highway vehicle use for numerous parts of the province late last week due to forecasts that called for little precipitation and strong winds.

Highway 16, a major thoroughfare between Edmonton and Prince George B.C., was forced to close in both direction Sunday when a wildfire crossed the roadway west of Edson, Alta., but was reopened early Monday.

--By Rob Drinkwater in Edmonton