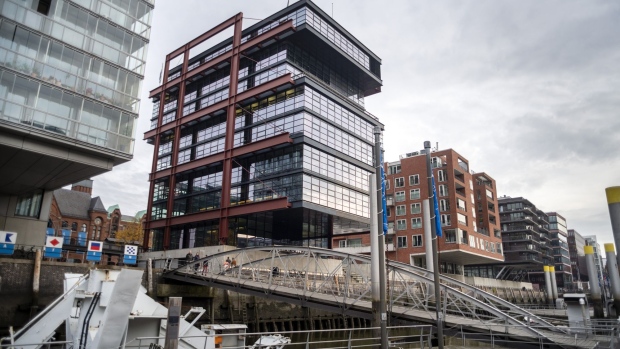 (Bloomberg) -- COSCO Shipping occupies a prime waterfront location in Hamburg. The Chinese marine transportation giant’s European headquarters sit between a historic red-brick warehouse complex and the glass and steel of the redeveloped harbor area. The company is about to expand its presence after striking a deal last month to acquire a stake in a container terminal.

For a city that markets itself as China’s gateway to Europe, the agreement is a step toward becoming a go-to hub for COSCO’s vast cargo shipments. But away from the business of trade that Hamburg has thrived on for centuries, the tighter embrace of China is stirring concerns.

The dilemma is whether such economic ties now leave Hamburg exposed to the vagaries of great power politics as tensions between the U.S. and China spill into global supply chains. Its status as Germany’s biggest port also puts it at the heart of a broader debate over the country’s role as Europe’s political heavyweight and the world’s No. 3 exporter.

Five years ago, many companies wanted to be part of China’s Belt and Road infrastructure and investment initiative, despite issues over reciprocal market access. Now there’s more hesitation, said Doris Hillger, head of the foreign trade department at Hamburg Chamber of Commerce.

“Any deepening of interaction with China is from the start viewed more or less critically,” Hillger said in an interview at her office this month. “And that’s what makes it very difficult for businesses, but also for business locations such as a port city like Hamburg.”

How to handle that delicate balance of interests will confront Germany’s incoming government from the get go. The likely next chancellor, Olaf Scholz, is a Hamburg native and was the city-state’s mayor from 2011 until 2018, when he took up the post of finance minister in Angela Merkel’s federal government. Total Germany-China trade had burgeoned to more than $200 billion by 2019, half of it passing through Hamburg.

Scholz has credentials as a China enthusiast. He met with President Xi Jinping in 2017 when the Chinese leader attended the Group of 20 summit in Hamburg. As finance minister, he issued a personal invitation to Vice Premier Liu He to attend a Europe-China forum known as the Hamburg Summit in November 2018. Scholz visited China in early 2019, when he was chided by the Sueddeutsche Zeitung newspaper for not bringing up human rights.

But Scholz has maintained a strategic ambiguity on what China policy might look like under his leadership of Europe’s biggest economy. His Social Democratic Party’s election program barely mentioned China, and foreign policy hardly featured in the campaign.

With the Biden administration pressing Europe to align more clearly with the U.S. in its standoff with Beijing, Scholz will come under immediate pressure to show his hand on what Secretary of State Antony Blinken has called the world’s “greatest geopolitical test.”

“The name Scholz hardly rings a bell to the Chinese public,” China’s state-run Global Times newspaper said in an article the day after the SPD won the election on Sept. 26, adding that he’s been “reticent about his blueprint on China policy.” It added, though, that “Chinese observers said Scholz shares abundant connections with China, and the new government will be more likely than others to continue Merkel’s policy.”

That’s not necessarily a given. Electoral math dictates that at least initially he will be a weaker chancellor than Merkel, unlikely to enjoy the same control over foreign policy as she does after almost 16 years in power.

His prospective coalition partners in the Greens and the Free Democratic Party are more critical of Beijing than was Merkel, who drove through an EU investment agreement with China last year in the face of U.S. opposition. Scholz himself has made much of working more closely with European partners.

Read More: Germany’s Election Is a Postwar Watershed in More Ways Than One

Talks on a common platform for government are only just beginning. However, the Greens are determined to push for their foreign policy priorities, especially in regard to being more vocal in condemning China’s threats directed at Taiwan and its treatment of ethnic Uyghurs, according to Till Steffen, the party’s newly elected member for the Hamburg district of Eimsbuettel.

“There will be a difference with policy on Russia and China” from the Merkel era, said Steffen, who served as justice senator in Hamburg’s SPD-Greens administration when Scholz was mayor.

That’s likely to mean more focus on democracy and human rights rather than any wholesale reduction in economic cooperation. “I’m not sure if any government can reduce trade with China because the German economy is too dependent on China,” he said.

At the start of Merkel’s tenure, Berlin’s policy was one of Wandel durch Handel, literally “change through trade” — economic engagement aimed at bringing Beijing on board with western institutions and values. Now, many see that approach as not just failed, but as having instead changed Germany to become beholden to China.

It’s a charge felt acutely in Hamburg. The world’s most populous nation is the port’s biggest trading partner by some way. The city is Europe’s third-biggest port, after Rotterdam and Antwerp, but it’s the continent’s No. 1 rail port and has more than 200 container train connections to China each week as part of the “New Silk Road.”

About one in every three containers shipped via the port in 2019 was destined for China. In the first six months of 2021, seaborne container handling with China was more than four times the volume of that with the U.S., its No. 2 partner, according to the Port of Hamburg authority.

COSCO is one of more than 550 Chinese companies that have set up offices in Hamburg. Among them is XCharge, a Beijing-based maker of fast-charging stations for electric vehicles.

“Hamburg is where our European subsidiary is located and where we have built our European service network around,” Heather Xue, XCharge’s vice president for marketing and strategic development, said by email. “We do hope to see the ties between the two countries continue to be improved in the post-Merkel era.”

Hamburg was built on free trade, and traces its mercantile origins to a guarantee of tariff-free access for ships from the North Sea up the River Elbe made by the German king and Holy Roman Emperor Barbarossa in the 12th century.

Today, it’s Germany’s richest state, with the highest GDP per capita in the country. The city of 1.8 million people is home to about 100 consulates — including those of both China and the U.S. — and the center is conspicuously affluent, cosmopolitan and still steeped in maritime tradition.

Streets with names like Shanghaiallee and Hongkongstrasse allude to its rich trading links, while traditional ships strain at their moorings in HafenCity, the huge redeveloped habor area whose landmark building is the Elbphilarmonie concert hall, its undulating roof reminiscent of tossing seas.

Ties with China are not about to be dislodged. None of the coalition parties want to compel German businesses to pull out of China; not even Katherine Tai, the hawkish U.S. trade secretary, advocates economic “decoupling.”

Rather, the desire among German business is for a clearer line on Beijing from the next government, and for more European consensus in its approach, according to a person familiar with China policy and industry. They asked not to be named discussing politically sensitive matters.

Just as important is China’s own position, according to Mareike Ohlberg, a senior fellow at the Asia Program of the German Marshall Fund of the United States.

Beijing has no interest in cutting ties overnight, but the gradual aim is to become less dependent on foreign countries while keeping them partly reliant on the Chinese market, she said. “Germany would be well served by recognizing that and acting accordingly,” said Ohlberg, who is based in Berlin.

Certainly, the expectation among businesses in Hamburg is that the next government will be tougher on China when it comes to issues such as market access and intellectual property, as well as on social and environmental compliance, said Hillger at the chamber of commerce.

“China is and will remain important for Hamburg’s companies, so we need to deal with China in some way or another, everybody agrees on that,” she said. Still, that imperative is complicated by “a complete shift in public perceptions and discourse.”

It’s the direction of travel already under way in Berlin and Brussels, with tighter investment screening and new trade defense mechanisms. A supply chain law aimed at bolstering resilience was already enacted by Germany and is set to be introduced at EU level this fall. None are aimed exclusively at China, but each measure has China in mind.

Assuming he achieves his aim of forging a coalition by Christmas, Scholz will face immediate challenges on his China policy. The first is likely to be over the Beijing Winter Olympics in February, with pressure building for a diplomatic boycott. A decision is also due on whether Huawei Technologies will be allowed to install Germany’s 5G network.

“Merkel was seen by Beijing as honest and straight,” said Joerg Wuttke, head of the European Union Chamber of Commerce in China. “There wasn’t this kind of being nice in Beijing and being bitchy in Berlin and I think that’s what the Chinese leadership appreciated.” Scholz, he said, “is the same guy.”

— With assistance by Colum Murphy and Lucille Liu