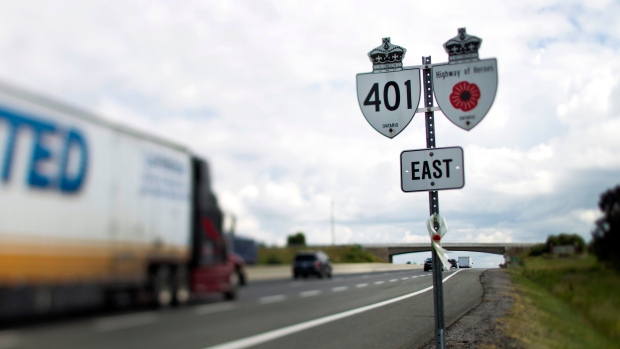 A truck drives past a sign for King's Highway 401 in this photo taken with a tilt-shift lens near Cobourg, Ontario, Canada, on Monday, Aug. 8, 2011. , Bloomberg

TORONTO - Canada's trucking industry wants the federal government and the U.S. to exempt their workers from forthcoming vaccination mandates, but health experts say the proposal is problematic.

The Canadian Trucking Alliance is arguing that if the government sticks to its current plan requiring all truckers crossing into Canada to be fully-vaccinated against COVID-19 by Jan. 15, the country's supply chain issues and worker shortages will worsen.

The CTA wants the government to uphold the exemption it granted truckers when vaccines became available earlier this year, until the country resolves its supply chain issues.

However, health experts say that exemption would be unfair because other industries are facing worker shortages too and not being granted an exception.

They say making allowances for a highly mobile group like unvaccinated truckers could be dangerous because the virus could spread even further, and that these workers have had enough time to get their shots.

“Everybody admires the hard working truck driver and that all through the pandemic they have been barrelling through with their loads of food for the supermarkets... but the vaccines are available and they've been available for the best part of a year now,'' said Timothy Sly, an epidemiologist and professor emeritus at Ryerson University's School of Occupational and Public Health.

“With the increasing variant coming along, there is no excuse at all now for not being vaccinated.''

Sly believes the truckers shouldn't get an exemption because they're making deliveries all over North America, often interacting with people at pickups and drop-offs and can easily bring the virus along with them to uninfected places.

“The variant is out there and is our hunting for the unvaccinated,'' he said.

“If you want to reduce your population of truck drivers even more, then hold off on the vaccination and you're going to see an awful lot of them become ill with COVID-19.''

While there are many companies with 90 per cent or more of their truckers vaccinated, CTA President Stephen Laskowski said there are also businesses with far fewer vaccinated drivers.

He's heard of companies with vaccination rates as low as 40 or 50 per cent and said businesses are trying to convince workers to get the shots through education and even monetary incentives.

Fuel Transport, for example, will give workers who get vaccinated a $10,000 bonus, it announced last week.

If no exception is granted for truckers, Laskowski predicts many will be forced out of work and finding replacements will be next to impossible because the industry has long struggled to attract employees willing to work long hours on the road.

Roughly 332,000 truck drivers worked Canada's highways in October, roughly in line with pre-pandemic levels. There were 18,000 vacancies in recent months as young drivers, women and retirement-age workers left, according to Trucking HR Canada. Some 55,000 job vacancies are projected for 2023.

“We have a significant driver shortage already,'' Laskowski said.

“To say, if these individuals choose not to be vaccinated and leave the sector, we can go out and replace them, the reality is we can't.''

Also at stake are supply chains that are already hampered by material shortages, extreme weather in B.C. and abroad and COVID-19 outbreaks.

“There are many reasons why the supply chain is suffering the way it is,'' said Laskowski.

“Truck drivers is one of the major pieces of the puzzle... and that piece of the puzzle as a problem is only going to get bigger with these mandates.''

But giving exemptions and tweaking rules for some can make understanding already complicated COVID policies even more difficult, said Sara Allin, an associate professor at the University of Toronto's Dalla Lana School of Public Health.

People are already confused by rules requiring vaccination to enter some establishments and not others and by regulations that have forced some workers to get vaccinated but left others free to forgo COVID-19 inoculations.

“Having all these carve outs and different rules is confusing,'' she said.

“I think we need some really clear messaging and standards on vaccines.'