Tribeca Investment Partners said making those changes and pivoting to a pure base metals miner would improve Teck’s environmental credentials and could lead to a sixfold share gain over the next year. The company should also scrap its dual-class shares to boost returns, the Australian fund with US$1.6 billion in assets said in a letter to the board.

“There’s been a very steady de-rating of the company versus its peers over the last five years and if they continue to do nothing they can only see that continue,” said Tribeca partner Ben Cleary, citing overhauls at Teck rivals Rio Tinto Group and BHP Group as examples of a better way forward.

A spokesman for Vancouver-based Teck said the company hasn’t received the letter. “I can point out though that Don received 98 per cent votes in favor of appointment at our recent AGM,” Doug Brown, director of public affairs, said by phone.

“The board has full confidence in Don Lindsay and the rest of Teck’s management,” Sheila Murray, Teck’s chairwoman, said in an emailed statement.

Tribeca faces entrenched ownership and management in its battle with Teck, Canada’s biggest diversified mining company. The Keevil family controls Teck through dual-class shares, and has been involved with the firm for more than six decades. Tribeca holds a 1.8 per cent stake, worth about US$85 million at the current share price. 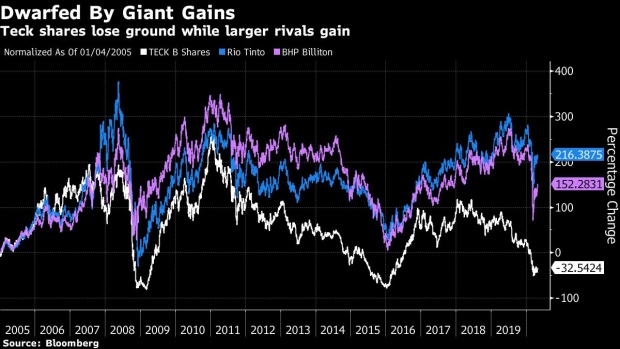 The activist pressure comes at a difficult time for Teck, whose stock has tumbled about 60 per cent in the past 12 months amid the oil rout and the plunge in prices for its copper, zinc and steel-making coal. The company’s market value has dropped below US$5 billion, after touching a four-year low last month. The company’s Canadian shares rose 0.3 per cent to $12.41 as of 9:59 a.m. in Toronto.

The miner has been forced to temporarily suspend its Quebrada Blanca copper expansion in Chile because of the coronavirus pandemic, while its metallurgical coal and energy divisions have been beset with problems this year. The miner is considering halting production at the Fort Hills oil sands mine in Alberta, and pulled the plug on a planned multibillion oil project in February.

“We agree that Teck had traded below its potential,” Jackie Przybylowski, an analyst with BMO Capital Markets, said in a research note. But a major shakeup to the portfolio “is likely to be high risk, and costly.”

Tribeca, a Teck holder for three years, is launching its campaign now because “enough is enough,” Cleary said in a phone interview from Singapore, where he works for the Sydney-based firm.

Tribeca’s previous activist campaign against BHP, which coincided with a similar push by Paul Singer’s Elliott Management Corp., helped prompt the world’s biggest miner to sell a suite of U.S. shale assets and reshuffle its board, resulting in billions of dollars returned to investors, the fund says.

Cleary said Tribeca had held informal discussions with other major Teck investors about its complaints. He declined to name them and said Tribeca wasn’t working with other investors. Teck’s biggest institutional shareholders include China Investment Corp., the sovereign wealth fund, according to Bloomberg data.

While Lindsay has previously said the zinc and copper division could be twice the size of its coal arm once the Quebrada Blanca mine is fully developed, and has raised the possibility of spinning off oil assets, the changes would require a fundamental shift for the company.

Last year the coal and metals segments each accounted for roughly 46 per cent of revenue, with energy making up the rest. Tribeca is calling for Teck to sell or spin off its 21 per cent stake in the Fort Hills oil project and unload its coal business to focus on copper, zinc and possibly nickel.

The fund also expressed frustration with the board and questioned why it hasn’t sought to oust Lindsay, who has been in charge since 2005, making him one of the longest-serving CEOs in the sector. Over that time, Teck’s shares have dropped more than a quarter including dividends, lagging gains by Rio Tinto and BHP.

“There is no sugar coating the underperformance of the company over the last 15 years,” the fund says in its letter.

Teck shares would also get a boost from scrapping the dual-class shares, making the company a take-over target, the fund argues in its letter dated April 30.

Family patriach Norman Keevil stepped down as chairman in 2018, though his son Norman Keevil III remains on the board as vice chairman. Former Chairman Dominic Barton, now Canada’s ambassador to China, said in 2018 that neither family control nor the dual-class shares are going anywhere.

“I don’t see this as a ‘Keevils or nothing’ issue because the Keevils want to make money as much as the minority shareholders want to maximize their investment,” Cleary said, adding Tribeca has expressed its concerns to the family. Even if the share structure were left alone, Teck could undertake the other measures and enjoy a substantial boost, he said.

The hedge fund’s campaign to push Teck out of the fossil-fuels business isn’t driven by green ideology. A good portion of the fund’s investments are in oil transportation and service providers. The metallurgical coal produced by Teck is used mainly for steel making and not for burning in power plants.

Even so, it believes that cutting off oil and coal would attract the rising pool of pension funds and family offices that are restricting their investments in companies based on their environmental impact.

“You can either do something now and see a material upside or you can continue to de-rate and be an orphan stock in the global materials universe,” Cleary said.